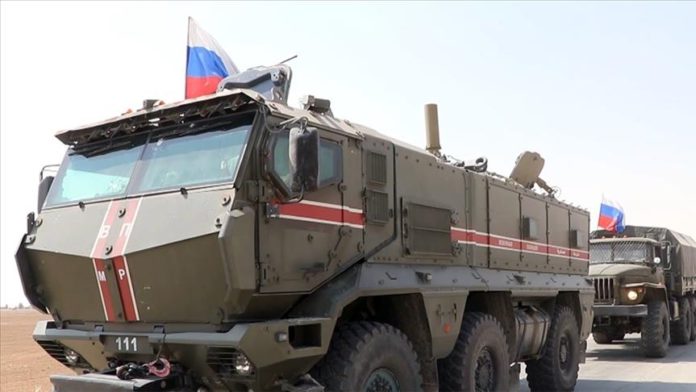 In its peacekeeping role between Azerbaijan and Armenia in the Upper Karabakh region, Russia has exhibited behavior favoring the Armenian side, experts said Thursday.

In one instance, commander of the Russian peacekeeping force Rustam Muradov was caught on camera with senior figures of the so-called Armenian entity Upper Karabakh, drawing ire from Baku.

Azerbaijan has also decried the presence of the so-called flag of the Armenian entity during talks between the Russian and Armenian delegations as negligence of international law by Moscow.

In one of its online news reports, the Russian Defense Ministry recently used the term “Republic of Nagorno-Karabakh,” which it subsequently had to remove following the Azerbaijani reaction.

Azerbaijani frustration with Russia mounted further when the peacekeeping force allowed Armenian Foreign Minister Ara Ayvazyan to use the Lachin corridor to visit the so-called Armenian entity in Upper Karabakh, which Baku considers a blatant provocation.

In interviews with Anadolu Agency, Azerbaijani experts have underlined that such actions by Russia would do little to contribute to peace and stability in the region.

Araz Aslanli, a senior expert at Azerbaijan’s State Customs Academy, said some of the discourse and policies of the Russian peacekeeping troops in the region have raised doubts concerning Moscow’s goodwill among Turks and Azerbaijanis.

“Russian troops should act with the awareness that they are currently deployed on Azerbaijani soil,” Aslanli said.

Another expert, Nazim Cafersoy of the Caucasian Center for International Relations and Strategic Studies (QAFSAM), said Russia appeared to be contributing to the continued presence of illegal armed elements in the region, rather than ensuring peace and stability for Azerbaijanis and Armenians.

“Russian troops should engage in activities in accordance with their job definition to uphold the cease-fire in the region and avoid any kind of action against Azerbaijan’s territorial integrity,” he added.

The truce is seen as a victory for Azerbaijan and a defeat for Armenia, whose armed forces have withdrawn in line with the agreement.