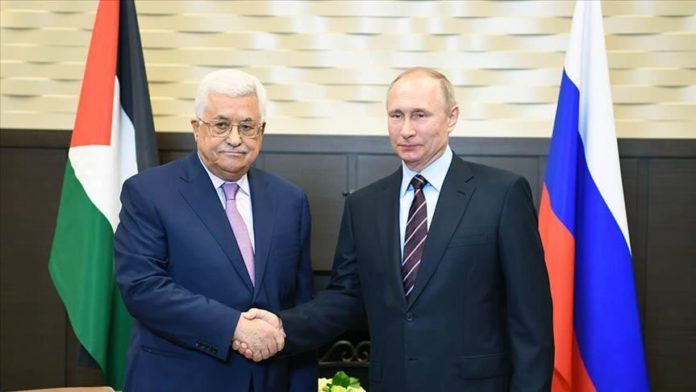 Russian and Palestinian presidents discussed the settlement of the Middle East conflicts in a phone talk on Wednesday.

Vladimir Putin reaffirmed to his Palestinian counterpart Mahmoud Abbas Russia’s adherence to “a just and lasting solution to the Palestinian-Israeli conflict”, the Kremlin said in a statement on its official website.

“The Russian side confirmed its principled position in support of a just and lasting solution to the Palestinian-Israeli conflict in accordance with the existing international legal framework. In this context, the importance of strengthening inter-Palestinian unity was emphasized,” the statement said.

They also discussed issues of Russian-Palestinian cooperation and agreed to continue cooperation in fighting the spread of the novel coronavirus.

On Jan. 28, US President Donald Trump unveiled the so-called “Deal of the Century” to end one of the longest-running disputes in the Middle East.

Under the plan, Trump proposed a patchwork Palestinian state boxed in by illegal Israeli settlements, as well as recognition of Israeli sovereignty over the West Bank, and Jerusalem as Israel’s “undivided capital”.

The so-called peace plan has drawn widespread criticism as it unilaterally annuls previous UN resolutions on the Palestinian issue and suggests giving Israel almost everything it has demanded.