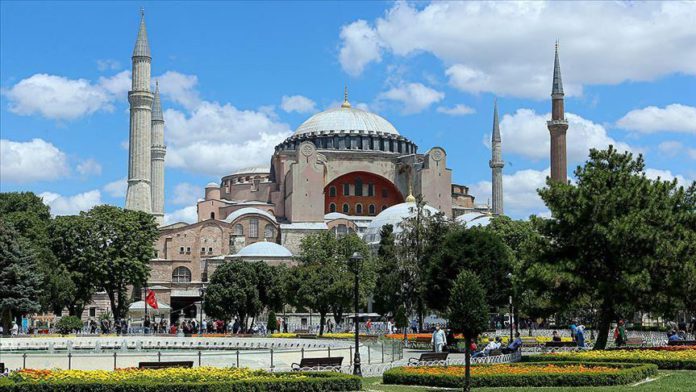 Restoring Hagia Sophia’s status as a place of worship is a great joy for the believers of the three monotheistic religions — Muslims, Christians, and Jews — first deputy head of the Spiritual Board of Russian Muslims said on Monday.

Hagia Sophia will once again become a place where the name of God will be honored and praised, Damir Muhetdinov told Anadolu Agency.

“We welcome the fact that there is one more place of worship in which the name of God is commemorated on Earth. We see this as another historic victory for monotheism,” Muhetdinov said.

From the very beginning of the discussion over Hagia Sophia’s status, the Spiritual Board of Russian Muslims assumed a position of non-interference in the matter of a sovereign state, while stressing the importance of preserving inter-religious peace and the monument itself, designated as a UNESCO World Heritage site, he said.

“Being an object of culture of world significance, in our opinion, Hagia Sophia should be accessible to people of all faiths and religious views,” he said.

Muhetdinov expressed confidence that the Turkish people and their political leadership will find “the right ways” to preserve this object and not violate the rights of other religious groups and confessions.

“With the example of the Sultan Ahmed Mosque, we know that anyone, regardless of their religion, can come to this place — to pray or see its beauty and get acquainted with the Muslim prayer. Therefore, the proposals voiced to date to preserve the historical appearance of Hagia Sophia as an architectural monument are correct and will serve to preserve peace, harmony, and understanding between different peoples and cultures,” he said.

Turning to relations with Turkey’s Religious Affairs Directorate, Muhetdinov said their exchanges have been “constructive” and “brotherly” for decades.

“The Turkish side took part in such important projects as, for example, the construction of the Cathedral Mosque in Moscow. The decoration of the mosque was largely a gift from the Turkish side and his Excellency Recep Tayyip Erdogan as a sign of respect and fraternal solidarity with the Muslims of Russia,” he said.

These days, a large project translating the encyclopedia of Hadith from Turkish into Russian consisting of seven volumes is being completed, and Russian and Turkish scientists have been working on its publication in Russian for the last five years, Muhetdinov added.