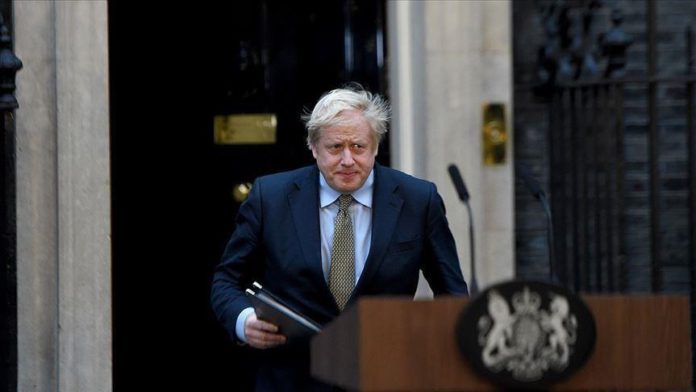 Britain’s prime minister warned on Tuesday that a Russian invasion of Ukraine would be “tragic and futile” and would be met with a united response from NATO.

In a statement to the House of Commons, Boris Johnson said an invasion and attack on the Eastern European country would precipitate bloodshed akin to conflicts in Bosnia and Herzegovina and Chechnya in the 1990s, adding that the UK, along with its NATO allies, would respond in the strongest manner possible.

“This winter, we witnessed a spectacle that we had hoped to have been banished from our continent. A large and powerful country amassing troops and tanks on the border of a neighbor with the obvious threat of invading,” Johnson said in reference to the Russian military buildup on Ukraine’s eastern border.

“Russia has, of course, already attacked Ukraine, illegally annexing 10,000 square miles of her territory in 2014, igniting a war in the Donbas region, and Ukraine has scarcely known a day of peace ever since. Now, Ukraine faces the danger of a renewed invasion and this time the force arraigned on Ukraine’s frontier comprises over 100,000 troops, far bigger than anything Russia has deployed against her before,” he added.

Should Russian military forces overwhelm Ukrainian defenses and occupy its towns and cities, Johnson said he would “shudder” to contemplate the tragedy that would arise from such a crisis, underlining that Kyiv has the right to defend its sovereignty and that Ukrainian resistance would be “dogged and tenacious.”

Johnson, increasingly embattled over corruption and scandals at home, made clear that no one would gain from such a disaster. He said that by invading Ukraine, Russia would create a “wasteland” in Eastern Europe, providing no peace to the people whom Moscow claims to protect.

The premier also told lawmakers that the UK stands ready to deploy more troops to bolster and protect NATO’s eastern border should there be a Russian invasion.

The possible deployment comes a week after the British government supplied anti-tank arms to the Ukrainian military.

Along with countries in the EU and NATO allies, the UK would also impose “heavy economic sanctions” on Russia unlike any others in the past, Johnson vowed.

He appealed for a diplomatic solution to the crisis, telling lawmakers of his reminder to President Vladimir Putin on the UK and Russia’s united fight against fascism in World War II.

“The British Army leads the NATO battle group in Estonia, and if Russia invades Ukraine, we would look to contribute to any new NATO deployments to protect our allies in Europe,” the British prime minister said.

Foreign Secretary Liz Truss had earlier declined to say whether or not British troops would be sent to assist Ukrainian forces against Russia.

“If Russia pursues this path, many Russian mothers’ sons will not be coming home. The response in the international community would be the same and the pain that would be inflicted on the Russian economy will be the same,” Johnson said.

In an earlier phone call with Putin, Johnson reportedly voiced understanding over Russia’s concerns related to NATO expansion in Eastern Europe, and assured the Russian president that the military alliance had no intention of encircling or threatening Russia.

He did, however, point out to Putin that Ukraine also had the right to defend itself.

Tensions between Russia and NATO are rapidly rising over fears of an imminent Russian invasion of Ukraine. Moscow has assured the West that it has no intention of invading and that its military buildup along the border is part of routine exercises and training.