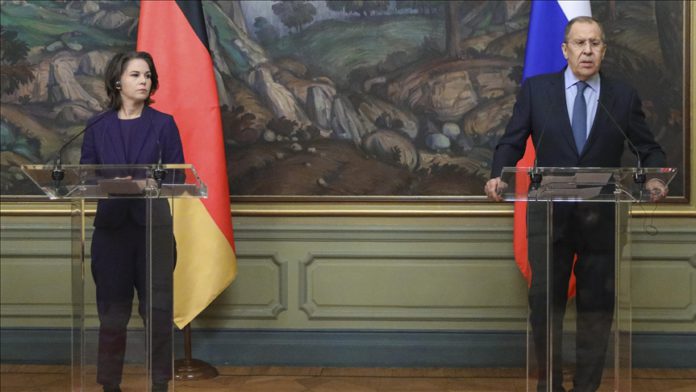 Russian Foreign Minister Sergey Lavrov discussed over phone a range of issues including the Iran nuclear deal with his German counterpart Annalena Baerbock on Friday.

According to the Russian Foreign Ministry, the two ministers focused on the restoration of the 2015 Joint Comprehensive Plan of Action.

Both sides stressed that there is no alternative but to continue focused diplomatic work on reviving the agreements in the Austrian capital Vienna, it said.

Lavrov and Baerbock also talked about the Ukraine issue, and expressed support for Normandy Four – Germany, France, Russia, Ukraine – on the implementation of the Minsk agreement.

“Lavrov again drew attention to Russian initiatives on security guarantees, in Europe, and shared his first reaction to the US and NATO documents received in response to these initiatives, emphasizing the … non-expansion of the North Atlantic Alliance and non-deployment of strike weapons threatening Russia,” the readout added.

The two ministers also spoke about bilateral issues, and Lavrov once again called on the German government “to abandon discriminatory actions” against RT Deutsch. Germany had taken Russia’s international television station off air last month for allegedly not having a valid satellite license.