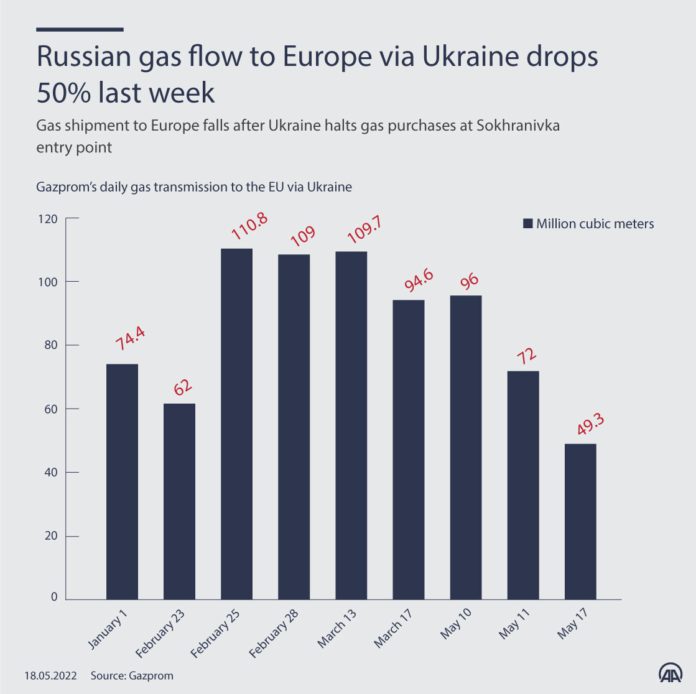 Russian natural gas shipments to Europe via Ukraine decreased by about 50% in the last week, according to Gazprom’s data, compiled by Anadolu Agency on Wednesday.

The company’s gas transmission to the EU via Ukraine runs at an average of 100 million cubic meters per day, Gazprom spokesman Sergey Kupriyanov said in a statement on Feb. 28.

The increase in gas flow can be attributed to harsh winter conditions and stockpiling for the rest of winter amid fears of gas cuts from Russia.

On May 10, gas shipments dropped to 96 million cubic meters after Kupriyano confirmed that Ukraine said it would stop purchasing Russian gas from the Sokhranivka entry point.

A day after the statement from Gazprom, the volume of natural gas sent to Europe via Ukraine decreased 25% to 72 million cubic meters.

On May 12, Gazprom announced it would no longer use the Polish section of the Yamal-Europe pipeline, which carries natural gas to Europe.

The Yamal-Europe pipeline is known as one of the most important lines for the transmission of Russian gas to Europe, along with the Nord Stream pipeline and pipelines in Ukraine.

Gas flow further decreased to 62.7 million cubic meters on May 15.

On May 17, the shipment of Gazprom gas via Ukraine dropped to 49.3 million cubic meters, representing a 50% decline relative to one week earlier.