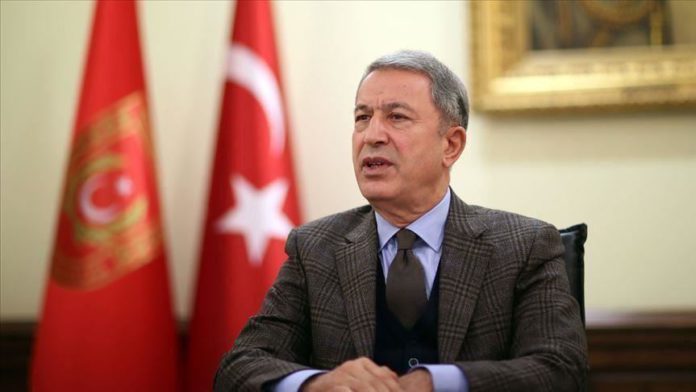 “Tomorrow, a large delegation will come [to Turkey] from Russia,” Akar told parliament’s Planning and Budget Committee. “Tactically and technically, it will be discussed who will locate where and who will do what [in Karabakh].

“The point we are trying to arrive at is a permanent cease-fire, providing stability, peace and normalization, opening the borders, spreading prosperity, ensuring that no one violates another’s rights,” he said.

Reminding that Azerbaijan’s lands have been under Armenian occupation for nearly 30 years, Akar said: “At this point, it is really absurd to try to teach Azerbaijan about humanity and peace. Azerbaijan is doing nothing but defending her home, her land.”

Akar visited Azerbaijani Defense Minister Zakir Hasanov on Wednesday to hail the liberation of territories from Armenian occupation as a result of the Russia-brokered deal between Azerbaijan and Armenia.

He also attended a ceremony held in connection with the Azerbaijani army’s successes against Armenian occupying forces in Nagorno-Karabakh, also known as Upper Karabakh, an internationally recognized territory of Azerbaijan.

Relations between the ex-Soviet republics have been tense since 1991, but new clashes erupted on Sept. 27.

On Nov. 10, the two countries signed the agreement for a long-term and comprehensive solution to the three-decade-long conflict.

The deal declared a complete cease-fire and end to more than six weeks of fighting. Baku liberated nearly 300 of its settlements, including the strategic city of Shusha, during this period.

In his speech Wednesday, Akar said the relationship between Turkey and Azerbaijan will last forever as “two states, one nation.”