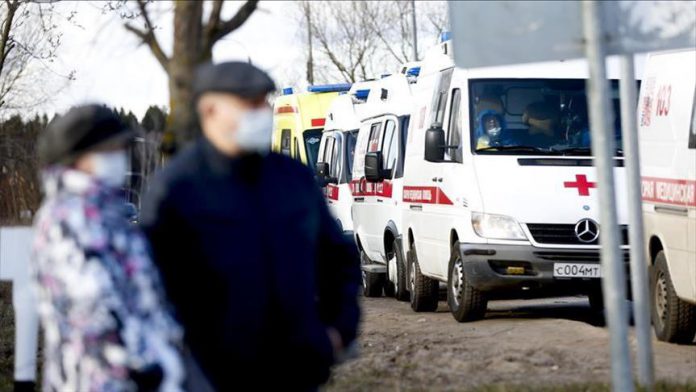 The number of coronavirus cases in Russia crossed 50,000 and the death toll moved closer to 500 on Tuesday.

A total of 5,642 people tested positive for COVID-19 over the past 24 hours, bringing the overall count to 52,763, Russia’s coronavirus emergency team said in a statement.

The death toll reached 456 after 51 fatalities were reported since Monday, while recoveries rose by 427 to 3,873.

Nearly half of the new patients — 45.5% — are asymptomatic and were diagnosed through testing, the team said.

The capital Moscow remains the worst-hit area, accounting for more than half — 3,083 — of the new cases.

Russia has ramped up testing across the country and has conducted more than 2.53 million tests so far, second only to the U.S.

The average age of COVID-19 patients in Russia is 47.9 years for women and 44.7 for men, the statement added.

Children under 17 make up 7.6% of the total patients, a figure in line with global trends, while the share of people aged 65 or over — 15.5% — is lower because of early measures to protect the elderly population, the team said.

On Monday, President Vladimir Putin said the situation remains difficult as the virus has spilled over from Moscow to all 85 regions of Russia.

He said authorities have made progress in efforts to slow down the spread but the peak of COVID-19 fatalities in the country was yet to come.

The novel coronavirus has spread to 185 countries and regions since emerging in China last December.

More than 2.48 million cases have been reported worldwide, with the death toll over 170,500 and recoveries near 653,800, according to data compiled by the U.S.’ Johns Hopkins University.