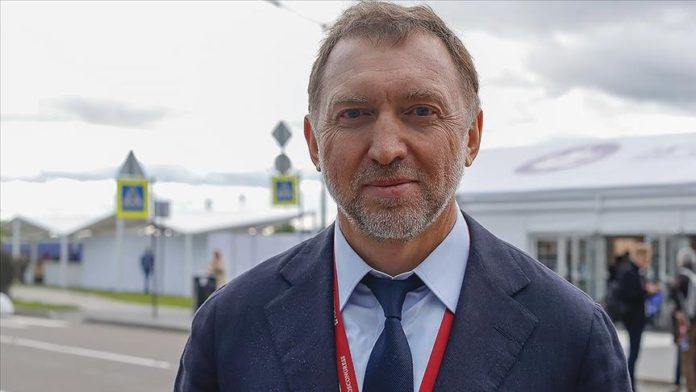 Russia chose to develop relations with the East, a Russian billionaire and industrialist Oleg Deripaska said on Monday.

Speaking in an interview with the Anadolu Agency, Deripaska said he would like to believe that part of the economic relations between Russia and the West will be restored, the question is on what terms and how quickly, he said.

“It’s hard to comment on. There may actually be a serious shift, both cultural and political, regarding security issues and cybersecurity. Of course, I would like to believe that part of the economic relations will be restored between Russia and the West, the question is on what terms and how quickly. But most importantly, Russia has made a choice for itself that it is necessary to develop new directions — Southeast Asia in the Far East, Siberia, and China,” he said.

Another two important directions, according to Deripaska, are southern, the first one is through the Caspian Sea and Iran to India and another one — with Türkiye, countries of North Africa and the Middle East.

“And I think these are not simply logistics decisions. These are issues of payments, credits, how to synchronize customs procedures, how to use digitalization, which is now available so that these are smooth transitions,” the businessman said.

Deripaska also called it necessary to reduce transaction costs in these directions and sign “deeper agreements” about protecting investments and settling disputes.

“Previously, Russia easily went to arbitration and international courts, and now many Russian companies even have lawyers unavailable,” he regretted.

Regarding strengthening logistics ties with Türkiye, Deripaska said both sides have to take “active participation” in their development.

“Also, not the least role will be played by intangible things — new agreements, new regimes, the creation of chains, suggesting that part of the raw materials will be refined in Türkiye to make the process of buying equipment and investments easier.

“Now, many processes will be complicated. It’s interesting to see how it will be implemented quickly,” he said.

Deripaska called “a war” sanctions against him and the companies that he once headed.

“I have been sanctioned for a long time and many companies that were associated with me. These sanctions it is a war. In the war, techniques and difficulties are kept private. But to say honestly — they are out (of options), they cannot bring more pain,” he stressed.

Deripaska said that the focus must be on creating new platforms for the future with the help of digitalization and new, modern capabilities related to artificial intelligence to facilitate trade, mutual investments, and the introduction of technological solutions.

“In the first turn, we have to develop the southern corridor — between Russia and Türkiye, Eurasian, which will use the Bosphorus, straits and the capabilities of Turkish companies to market these products in North Africa and the Middle East,” he noted.

Türkiye has a good experience in providing auto parts to the European automotive industry, and supply of the spare parts is an acute issue for the Russian automotive industry right now, so a solution could be to produce parts in Türkiye, using Russia’s raw materials and then partially returning some of the components to Russia to assembly plants, Deripaska said.

“Let’s say I know several companies that are now seriously considering (this option),” he said.

Another area where Russia and Türkiye could work together is agriculture. He suggested that Russia can increase supplies of agricultural products and replace the volumes that previously came from Ukraine to deepen their processing.

“Türkiye buys a lot of grain, uses it. Flour goes further for sale, (livestock) feed goes accordingly to the Turkish market,” he said.

He was the president of En+ Group, a Russian energy company, and headed United Company Rusal, the second-largest aluminum company in the world, until he quit both roles in 2018 after being placed under US sanctions for connections with the Russian President Vladimir Putin.

Deripaska was one of seven oligarchs sanctioned by the British government over the Russia-Ukraine. His assets were frozen, and he was denied entrance to the Western countries, although he had called for peace in Ukraine.