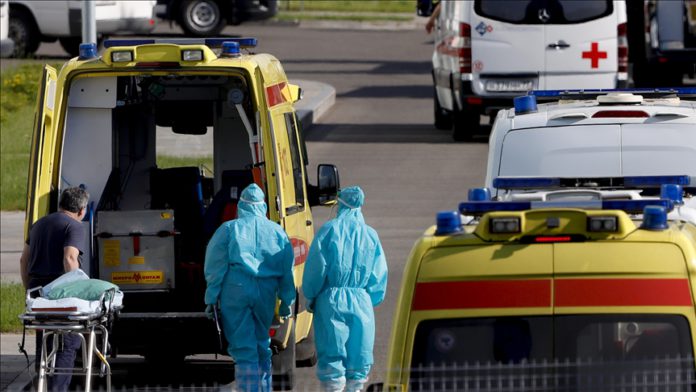 Russia on Wednesday saw its highest daily death toll since the coronavirus pandemic spread worldwide in early 2020, with 669 people dying over the past day, bringing the overall count to 135,214.

Over the same period, 21,042 people contracted the virus, raising the country’s caseload to 5.5 million and active cases to 378,992, Russia’s emergency task force said in a daily report.

The number of Russians cured of coronavirus climbed 16,356 since yesterday, bringing recoveries to 5 million, it added.

Meanwhile, the capital Moscow saw daily infections drop to a minimum for the last two weeks, with 5,823 people testing positive over the last 24 hours, bringing the tally to 1.35 million, while recoveries added 5,574 to hit 1.15 million, and fatalities rose by 117 to reach 22,448.

Officials have blamed the growing figures on the spread of the virus’ Delta variant, which is more contagious, aggressive, and difficult to treat.

In addition, the first case of the Delta Plus strain has been detected in Russia, Anna Popova, the chief sanitary officer announced on Tuesday.

Low vaccination rates have also taken their toll. Despite a social media campaign and President Vladimir Putin saying he himself got the Russian Sputnik V vaccine, only about 11.56% of the Russian population has gotten vaccinated so far.

Russia would need to see over 88 million people vaccinated to achieve collective immunity, but authorities do not expect to hit this benchmark by this fall.

Since December 2019, the pandemic has claimed over 3.95 million lives in 192 countries and regions, with more than 182.62 million cases reported worldwide, according to the US’ Johns Hopkins University.