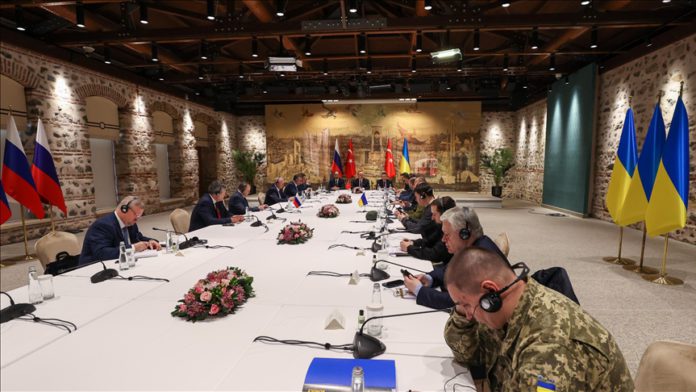 Russia sees that Turkiye’s President Recep Tayyip Erdogan stands for achieving peace in Ukraine and is ready to contribute to it in every possible way, Russian Foreign Minister Sergey Lavrov said Thursday.

Speaking in an interview with the RT Arabic TV channel, Lavrov noted that Turkiye does not have a plan for solving the crisis but is ready to provide a platform for peace talks between Russia and Ukraine as was done in March in Istanbul.

The minister also noted that the negotiations in Istanbul were constructive and marked the first time Ukraine had presented its vision of a peace treaty in written form.

Currently, the peace talks have stalled, and Russia passed the latest version of the draft peace treaty to Ukraine and it has been on the Ukrainian side without any movement since then, Lavrov said.

He called remarks by Ukrainian President Volodymyr Zelenskyy “an unserious approach” after Zelenskyy said that any peace talks could only take place between himself and his Russian counterpart Vladimir Putin, pointing out that the conclusion of any treaty requires thorough preparatory work, which is being done at levels other than the presidential level.

The minister noted that former NATO Secretary General Anders Fogh Rasmussen, at the request of the Ukrainians, is working on some kind of “group” in which he will prepare “guarantees” for Ukraine in the context of a peaceful settlement.

“If Anders Fogh Rasmussen was called upon to cobble together some ‘guarantees’ through a narrow circle of Western sponsors of the Ukrainian regime and then try to present it to the Russian Federation, then this is a dead end,” he warned.

Asked about the Italian initiative for a peace settlement in Ukraine, the top Russian diplomat said he only heard about it from the media and that the information conveyed by them “provokes regret,” as it demonstrates a lack of understanding of the problem by its authors.

Lavrov said that Russia appreciates the balanced position of the Arab world, which understands the reasons that led to the current situation, namely “the categorical refusal of the Western countries to agree on equal and indivisible security.”

He praised his recent visit to Oman, saying it was his first visit after Sultan Haitham bin Tariq Al Said ascended to the throne and that he was received by the sultan “courteously.”

Lavrov also spoke highly about his visit to Algeria and said a visit of the Algerian president to Russia is being prepared.

The minister then announced his visit to Bahrain on May 31 and Saudi Arabia on June 1, adding that in Riyadh, he will take part in a regular meeting of the Russia-Gulf Cooperation Council (GCC) Foreign Ministers Forum and will hold bilateral talks “with almost all participants” of the council.

“All Arab countries take a responsible position (on Ukraine). This proves that they rely solely on their national interests and are not ready to sacrifice them for the sake of anyone’s geopolitical opportunistic adventures. We have a mutually respectful relationship,” he said.

Lavrov slammed as “impudence” the attempts by Western countries to turn Arab countries as well as states in Asia, Africa and Latin America against Russia.

He said such an attitude shows that the colonial arrogance of the West still exists. However, according to Lavrov, this is against the forming of a multipolar world in which the Arab East will be one of the pillars, one of the centers.

He also said that Russia tries to persuade “Syrian Kurds” to abandon their separatist stance and to engage in serious dialogue with Damascus.

Russia is providing humanitarian help and actively supports efforts directed at creating conditions for the repatriation of the Syrian refugees.

The minister expects that a process allowing for the restoration of Syria’s full-fledged membership in the Arab League will be initiated at the upcoming meeting of the organization.

Lavrov praised the amnesty declared by Bashar Assad for everyone who was previously accused of crimes related to the terrorist threat and said it was a step expected by the UN and that now the UN envoy for Syria, Geir Pedersen, has to talk to the opposition to reciprocate and take a step toward reconciliation as well.

Lavrov said the situation in Syria’s province of Idlib remains tense, but thanks to the measures taken by the Russian military and the Syrian armed forces, there are no provocations from Idlib on the positions of the Syrian army and on Russia bases in Syria.

In general, there are no military tasks that would need the expansion of the Russian military contingent in the country, and therefore there are no plans to send more troops to this country, he said.

– Russia will not form alliances with China, India against third countries

Lavrov also stressed that Russia will not create alliances with China or India or anyone else against third countries.

He reminded that Russia has been cooperating with numerous Asian structures and has participated in the Asian organizations for many years.

He also noted that the alliances that are being built in Asia — the Shanghai Cooperation Organization (SCO) and BRICS (Brazil, Russia, India, China, South Africa) — are constructive and positive and not antagonistic or directed against anyone.

“Many countries of the Arab world are interested in establishing partnership relations with the SCO, where all the other leading sub-regions of our common vast continent are represented,” he noted.

About the Russian-Chinese bilateral military exercises, Lavrov said they have had a long history and the training has as their aims the fight against terrorism and strengthening the security of borders.