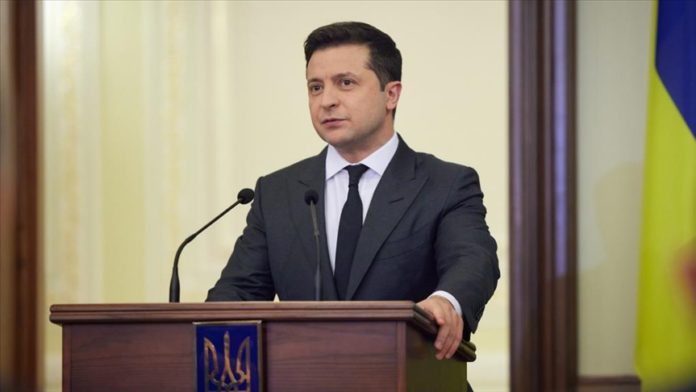 Ukraine’s president said Monday that Russia is looking for excuses to increase tensions under the guise of protecting Russian citizens by continuing to issue passports to the public in the “temporarily occupied territories” of Ukraine.

Volodymyr Zelensky met in the capital Kyiv with a delegation of US senators including Amy Klobuchar, Robert Portman, Chris Murphy, Jeanne Shaheen, Richard Blumenthal and Roger Wicker, according to a statement from the Ukrainian presidency.

​​​​​​​During the meeting, he thanked the US Congress for its solidarity with the Ukrainian people as his country faces security challenges.

Informing the delegation about the security situation on the borders of Ukraine, Zelensky stressed the need to prepare a preventive package of sanctions against Russia.

The US senators also expressed their support for the sovereignty and territorial integrity of Ukraine, stressing that the country has the right to independently choose ways to ensure its own security.

Russia, Ukraine and NATO have stepped up military exercises as tensions have intensified in recent weeks, with Kyiv openly accusing Moscow of planning an invasion.

According to the UN, fighting between Ukrainian government forces and pro-Russian separatists in Ukraine’s eastern Donbas region has seen more than 13,000 people killed since 2014.