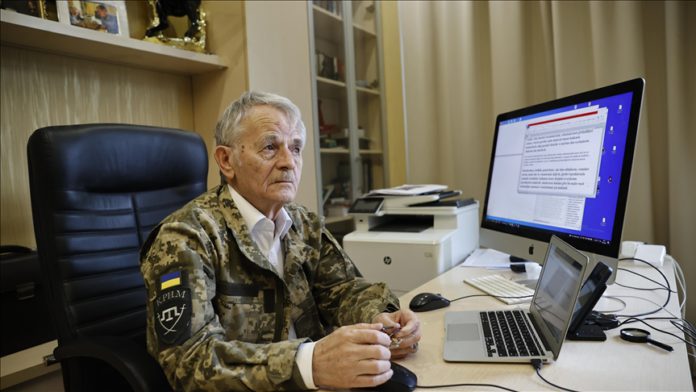 Russia is subjecting Crimean Tartars to the same repressive policies of the Soviet era, the leader of the Crimean Tatars said Thursday.

Mustafa Abdulcemil Kirimoglu, who is also a deputy in Ukraine’s parliament, was speaking to Anadolu Agency on the 78th anniversary of the Crimean Tatars’ deportation from their historical homeland to Siberia by Soviet leader Joseph Stalin in 1944.

What happened in 1944 was the Crimean Tatar genocide, Kirimoglu said, noting that up to 46% of the deported population lost their lives within the first two years.

Against this background, he said, Crimean Tatars, including himself, struggled to return to their homeland and regain their rights for around 50 years.

Referring to Russia’s illegal annexation of Crimea in 2014, Kirimoglu emphasized that Russia conducted a systematic policy of oppression against Crimean Tatars.

Consequently, over 30,000 of them fled from the peninsula, while some of those who stayed were killed or went missing, he said.

He said Russia through terror policies aimed to force Crimean Tatars, which comprised 13% of the population, out of the peninsula.

On the ongoing war against Ukraine, he said that Russia’s invasion is not going as it expected or planned.

Kirimoglu noted that the war presents an opportunity for the liberation of Crimea from Russian occupation.

An increasing number of Crimean residents, around 95% now, support the end of the Russian occupation, he said.

Kirimoglu also praised Turkiye’s support for both Ukraine and Crimean Tatars and underlined that Turkiye did not recognize Russia’s annexation of Crimea.

Crimea’s ethnic Tatars have faced persecution since Russia’s 2014 takeover of the peninsula, a situation Turkiye has decried.

Turkiye and the US, as well as the UN General Assembly, view the annexation as illegal.

Kirimoglu and the president of the Crimean Tatar National Assembly, Refat Cubarov, were banned from entering the peninsula after the annexation.

The Crimean Tatar National Assembly was branded an “extremist organization” and its activities were banned.

Some 2,500 Crimean Tatars who had direct ties to the assembly and everyone who had relations with it became members of the “extremist organization.”

Arrests of Crimean Tatars at their homes and mosques continue on charges of them being members of a “terrorist organization.”

Iraqi protesters try to storm US Embassy in Baghdad