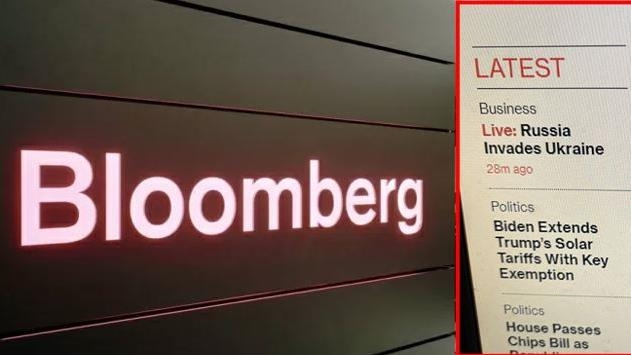 American news outlet Bloomberg has issued an apology after accidentally reporting that Russia had invaded Ukraine.

A headline – “Live: Russia Invades Ukraine” – went up on the home page of the financial news site at around 2100GMT.

Olga Lautman, an analyst and researcher focusing on Russia and Ukraine, posted screenshots of the blunder on social media.

She said the headline was taken down after more than 30 minutes.

Bloomberg offered an apology a little over two hours after the headline was published.

“We prepare headlines for many scenarios and the headline “Russia Invades Ukraine” was inadvertently published around 4 p.m. ET today on our website,” read a Bloomberg statement.

“We deeply regret the error. The headline has been removed and we are investigating the cause.”

As tensions soar on the Russia-Ukraine border, Western countries led by the US have been warning of an imminent attack by Moscow.

Russia has repeatedly denied the claims, accusing Washington and its allies of deliberately escalating the situation.

The Bloomberg blunder comes just days after Moscow lashed out at US media for spreading “false and provocative information” about the Ukraine situation.

“Unfortunately, the American media in recent months has been publishing a very large amount of unverified, distorted, and deliberately false and provocative information about what is happening in Ukraine and around it,” Kremlin spokesman Dmitry Peskov said this past Monday.

“This is already becoming obvious to almost everyone,” he added, commenting on Ukrainian President Volodymyr Zelensky’s recent statement that the threat of war had not grown “but the fuss has increased.”

Turkey's Borsa Istanbul down 0.58% at open