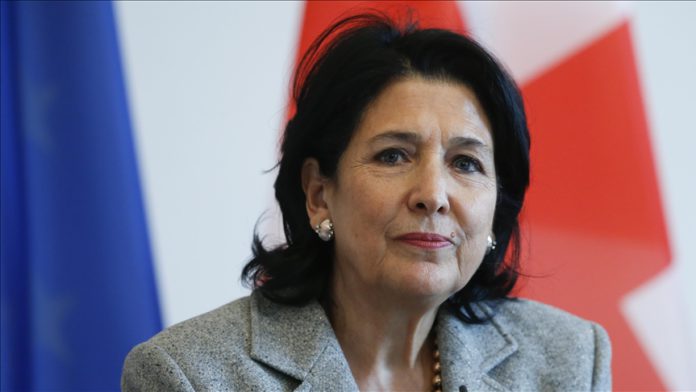 Problems between Russia and Georgia, including those concerning the territorial integrity of Abkhazia and South Ossetia, cannot be forcibly resolved but instead the solution should be through diplomacy, Georgia’s president said Tuesday.

“We have no means of forcibly resolving the issue of ensuring territorial integrity. We have taken on the responsibility that we will not use force to resolve these conflicts,” Salome Zurabishvili told representatives of international press organizations.

Zurabishvili also noted that Georgia does not have the opportunity to force Russia into a real dialogue today.

“The only alternative left is diplomacy. However, there is the Russian side, which has no desire for diplomatic behavior,” she added.

Zurabishvili noted that it is impossible to initiate dialogue with Russia while illegal activities such as human rights violations and the establishment of so-called borders continue in Abkhazia and South Ossetia, which unilaterally declared independence from Georgia and was supported by Russia.

“Unfortunately, any I don’t see any sign of dialogue (from Russia). Whenever we see signs of that, we are ready for it,” she added.

She recalled that there are military bases in Abkhazia and South Ossetia, noting that developments in the regions continue to progress towards annexation.

Assessing the recognition of the so-called rule of pro-Russian separatists in eastern Ukraine by the decision of Russian President Vladimir Putin, Zurabishvili said: “I think that the sanctions imposed are more symbolic than serious.”

“However, this is a sign that something will happen in the future. These sanctions will be imposed in a slightly different way than we have seen so far,” she said.

Stating that Russia used its policy of violence against Georgia in 2008 and again against Ukraine in 2014, Zurabishvili said necessary efforts were not made to stop it in time.

“If there is one thing we need to learn from Russia’s entry into Georgia in 2008 and into Ukraine in 2014, it is that our Western partners did not use all the opportunities they had at that stage.”

“Russia didn’t pay the full price, it could not be stopped,” she added.

Zurabishvili emphasized that the only way to fight without going to war against Russia is to impose sanctions that can bring effective results against the country.

Noting that Georgia stands in solidarity with Ukraine, she said the integration process of both countries with NATO and the European Union continues.

A 13-month conflict erupted between the Georgian army and Abkhazian separatists supported by Russia between 1992 and1993.

In 2008, a five-day conflict referred to as the South Ossetia conflict broke out between Georgia and Russia over the breakaway regions of South Ossetia and Abkhazia.

Tbilisi ultimately lost control of both areas and Russia later recognized them as independent states.

In response, Georgia cut off diplomatic relations with Russia, after which Switzerland took up the role of the mediator country.

Putin announced Moscow’s recognition of Ukraine’s breakaway regions of Donetsk and Luhansk in a speech Monday that also attacked Ukraine’s government and the US and accused the West of ignoring Moscow’s core security concerns.

The US, with its European allies, has said Russia is setting the stage to invade Ukraine after having amassed over 100,000 troops and heavy equipment in and around its neighbor.

Russia has denied that it is preparing to invade and instead accuses Western countries of undermining its security through NATO’s expansion towards its borders.

In 2014, Moscow began to support separatist forces in eastern Ukraine against the central government, a policy that it has maintained since then. The conflict has taken more than 13,000 lives, according to the UN.

Report finds Muslim communities among most discriminated against in UK