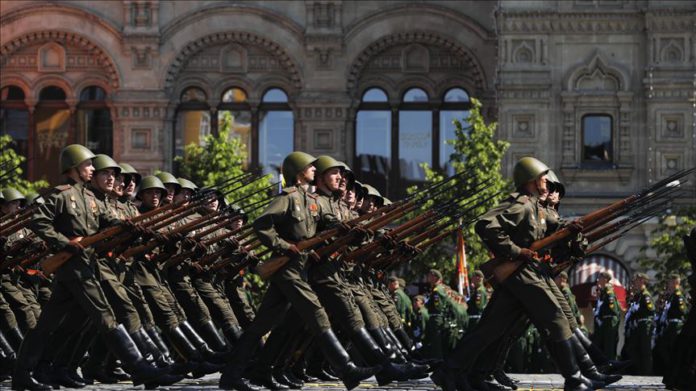 Some 14,000 troops from 13 countries as well as vintage and the latest state-of-art military hardware marched along the Red Square in Moscow on Wednesday to mark the 75th anniversary of its victory in World War II.

The parade, which highlighted Russia’s fighting capabilities were also held in 28 other cities under the shadow of coronavirus pandemic. The parade was also marked by a colorful fly-past by fighter aircrafts.

Originally, the parade was scheduled to take place on May 9. Several Western leaders, including German Chancellor Angela Merkel and French President Emmanuel Macron, were expected to take participate.

But the outbreak of pandemic forced Moscow to cancel the event.

Ahead of the parade, Russian President Vladimir Putin said the victory was “the triumph of good over evil, peace over war, life over death”.

He reminded the world of the contribution of the Soviet Union in defeating Nazi Germany in World War II.

“It is impossible even to imagine what the world would be if the Red Army had not come to defend it,” he said in an address to the troops.

He also slammed the West for “insulting Russia” by playing down the Soviet Union’s role in winning the war.

On May 26, Putin announced to hold the military parades on June 24, coinciding the anniversary of the historic victory parade held by Soviet troops in the Red Square in 1945 to mark the end of the War.

The decision was met with warnings about risks related to having such a large gathering in the times of COVID-19 pandemic when the world was observing social distancing norms. Russia is also not completely out of the coronavirus pandemic.

But the Kremlin said all the measures have been taken to provide security to the participants.

Due to pandemic many guests that included western allies in World War II, did not come to Moscow, which was met by Moscow “with understanding”.

Leaders of some former Soviet republics — Belorussia, Kazakhstan, Kyrgyzstan, Moldova, Tajikistan, Uzbekistan participated in the event, besides the presidents of Serbia, Bosnia, and Herzegovina.

The defense ministers of China and India also attended the parade, even as troops of both countries are engaged in a standoff along their borders.

“The Soviet people bore the brunt of the struggle against Nazism. In 1941, over 80% of the armed forces of Germany and its satellites were concentrated against the USSR. But this ruthless armada was powerless against the unity of Soviet citizens,” Putin said, adding that the Soviet army destroyed 75% of the total number of Nazi forces.

He also added that the militaries of Azerbaijan, Armenia, Belarus, India, Kazakhstan, Kyrgyzstan, China, Moldova, Mongolia, Serbia, Tajikistan, Turkmenistan, and Uzbekistan took part in the parade along with Russian soldiers.

Putin recalled the contribution of allies

Putin thanked allies for the contribution in the common victory, stressing the significance of the second front opened in June 1944.

“We honor the brave soldiers of the armed forces of all states of the anti-Hitler coalition, the feat of all the fighters against Nazism who fearlessly acted in the countries of Europe,” he said.

He emphasized that the world needs strengthening friendship and trust between countries, and declared that Russia is “open to dialogue and cooperation on the most pressing issues on the international agenda”.

“Among them is the creation of a common reliable security system, which is needed by a complex, rapidly changing modern world. Only together can we protect it from new dangerous threats,” he said.

In Russia, Victory Day is marked with a holiday to commemorate the surrender of Nazi Germany in 1945.

The victory was declared after the signing of the German Act of Capitulation late on the evening of May 8, 1945, in Berlin, when it was already past midnight in Moscow. Therefore, the Soviet government declared victory on the wee hours of May 9.