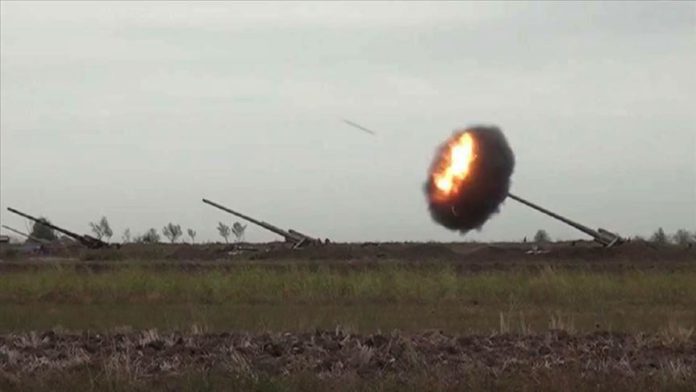 Russia on Wednesday announced its first deployment of peacekeepers to the Nagorno-Karabakh region, known also as Upper Karabakh.

The peacekeepers were stationed both in Upper Karabakh and the adjacent Lachin corridor to monitor the implementation of a newly declared cease-fire, said the chief of the Main Operational Directorate of the Russian General Staff, Sergei Rudskoy.

Rudskoy said that 27 sorties had been made over the past 24 hours, delivering 414 military personnel, as well as 54 automobile units and equipment, eight helicopters, and multiple unmanned aerial vehicles to Armenia.

Russian peacekeeping forces are now in control of the Lachin corridor and the Lysogorsky sovkhoz (state farm) section of the Lachin road, he added.

Noting that Russian troops had marched 300 kilometers (186 miles) and were fully deployed in settlements near the town of Goris in southeastern Armenia after unloading at the Erebuni Airfield in the capital Yerevan.

Russia also plans to set up 16 observation posts in the region.

Almost all Russian military personnel in the peacekeeping mission have previous experience in humanitarian operations in Syria, said Rudskoy, adding that a combat command group would monitor the situation around the clock.

“To carry out peacekeeping tasks, prevent possible incidents and ensure the safety of Russian military personnel, continuous interaction with the general staffs of the armed forces of Azerbaijan and Armenia has been organized.”

Russian President Vladimir Putin announced early on Tuesday that Azerbaijan and Armenia had signed a deal to end the conflict in Upper Karabakh.

*Writing and contributions by Iclal Turan in Ankara