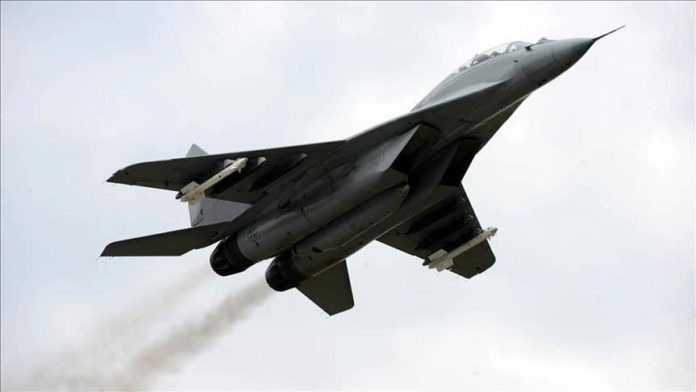 The US on Wednesday said more than a dozen newly unmarked Russian aircraft were delivered to an airbase in Libya to support warlord Khalifa Haftar.

“Over multiple days in May, Russian MiG 29s and SU-24 fighters departed Russia. At that time, all the aircraft have Russian Federation Air Force markings. After they land at Khmeimin Air Base in Syria, the MiG 29s are repainted and emerge with no national markings,” US Africom said on Twitter.

MORE: Over multiple days in May, Russian MiG 29s and SU-24 fighters departed Russia. At that time, all the aircraft have Russian Federation Air Force markings. After they land at Khmeimin Air Base in Syria, the MiG 29s are repainted and emerge with no national markings. (1/2) pic.twitter.com/ghgpKe9rDo

“They are flown by Russian military members & escorted by Russian fighters based in Syria to Libya, landing in Eastern Libya near Tobruk for fuel. At least 14 newly unmarked Russian aircraft are then delivered to Al Jufra Air Base in Libya,” it added.

The tweet by the US military came a day after it claimed Russia recently deployed fighter aircraft to Libya to support Russian mercenaries fighting for Haftar against the UN-recognized, legitimate government of Libya.

“Russia is clearly trying to tip the scales in its favor in Libya. Just like I saw them doing in Syria, they are expanding their military footprint in Africa using government-supported mercenary groups like Wagner,” Gen. Stephen Townsend, commander of US Africa Command, said Tuesday in a statement.

“For too long, Russia has denied the full extent of its involvement in the ongoing Libyan conflict. Well, there is no denying it now,” Townsend added.

Since April 2019, separatist warlor Haftar’s forces have launched attacks on the Libyan capital of Tripoli and other parts of northwestern Libya, resulting in more than 1,000 deaths.

US commanders also said Europe faces security risks and a migration crisis because of Russian involvement in Libya.

“If that day comes, it will create very real security concerns on Europe’s southern flank,” he said.