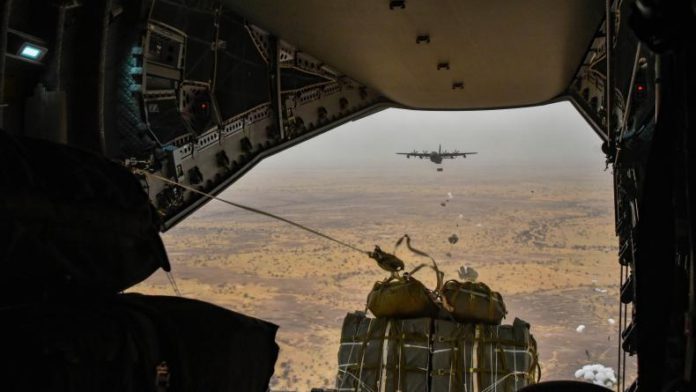 France’s decision to end Operation Barkhane and withdraw troops from the Takuba task force does not contribute to the restoration of security in Mali, Russian Foreign Minister Sergey Lavrov said Friday.

Lavrov said such a step creates the danger of the emergence of “enclaves of anarchy,” where militants who have already prepared for such actions, will operate unhindered.

“This threatens the territorial integrity of the country, as we have repeatedly told our French colleagues,” Lavrov said at a news conference in Moscow, following a meeting with his Malian counterpart, Abdulaye Diop.

Lavrov called the dissatisfaction of French authorities concerning Mali’s stance to seek security help from external structures “a relapse of colonial thinking,” adding that “it is time for Europeans to get rid of it (colonial thinking).”

“The settlement of internal political crises in Africa should be carried out primarily by Africans themselves and in the interests of Africans, and the task of the world community is to provide them with all the necessary support in this,” he said.

Diop said he discussed the situation in Ukraine with Lavrov and the government of Mali stands for a political solution to the crisis.

“We, in Mali, would not like the resolution of the conflict in Ukraine to depend on the issue of lifting sanctions, because unilateral sanctions are illegal, and this does not lead to a resolution of the situation. In order to get a solution, it is necessary to solve problems through political dialogue,” he said.

Regarding the Libyan crisis, Diop said he believes it can be solved through general elections.

He said Mali is in talks with the African Union and the Economic Community of West African States (ECOWAS) about the issue and that a compromise may be reached in the interim period.

“Due to the intervention of Western states in Libya, 60% of the territory is now affected by the conflict. By holding elections, we could solve this problem.

“We are in dialogue with ECOWAS, there is progress, our positions have become closer, and we believe that a compromise can be reached on the basis of a transition period of 24 months. I think these are very realistic plans to achieve success on a number of issues,” he said.

Diop noted that in the African Union and ECOWAS, African solutions should always be put at the forefront.

“In Mali, there are no problems with these African organizations, but they are constantly under the influence of non-African forces and promote solutions that are not suitable for Africans. We need to return to our organizations, strengthen solidarity, so that all decisions are African and Mali has always supported this position,” he said.

He said Mali has been constantly experiencing attempts of destabilization of the political situation “in different forms” and there was even an attempt to organize Mali’s conflict with its neighbors.

“A few months ago, there was an attempt to destabilize the government of Mali in various forms. We wanted to hold talks with the regional organization in January after an economic and trade embargo was imposed against Mali, the idea of which was that within a few weeks of the embargo, a people’s revolt would rise and the government would be overthrown. However, this did not happen.

“There have been a lot of attempts, they wanted, for example, to organize a conflict between Mali and its neighbors, for example, Mauritania. I think that in general, we live in a situation where every day there is an attempt at a coup because of the only problem — the Malians decided to become the masters of their own destiny, they decided to develop their country according to their vision,” he said.

Diop said countries that pretend, for the name of “defenders of democracy,” are behind such attempts and they continue such efforts because they do not understand that the world has changed.

“In any case, we have assumptions that it is a foreign force that is making such attempts. There are various forms of destabilization that are being undertaken now. But the most important thing for us is that despite the sanctions, we have the support of the Malian people, our country is united, the people remain calm, the people share the vision of our government — sovereignty, personal capabilities to ensure protection and territorial integrity,” he said.

Lavrov, asked about the attempted coup in Mali, said Russia understands but does not sympathize with “an attempt by France and other EU countries to claim a dominant role in any region of the world.”

He said French and EU top diplomats at meetings with him voiced concern about Russia’s contacts with Africa in general and in Mali, in particular, insisting that Africa is “a zone of the EU responsibility.”

“I cannot accept such arguments. It is pure colonialism, neocolonialism, the inability to part with past habits that have brought Africa to a difficult state,” he said.

Lavrov and Diop said they drafted plans for the development of ties and agreed to promote cooperation in mining, geological exploration, energy, infrastructure, agriculture and internet technologies.

Diop also said his government authorized him to hold talks with Russian companies about the construction of a railway in Mali.