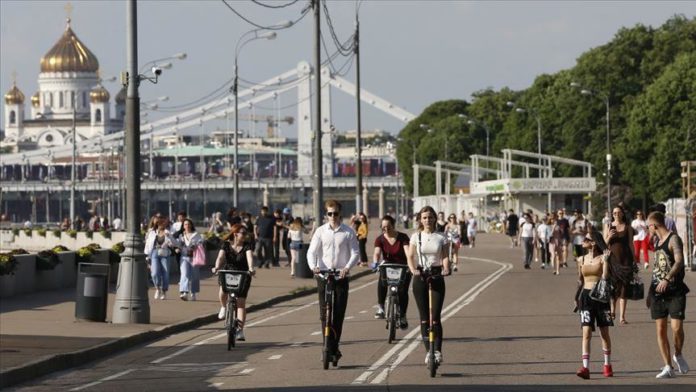 The total infections in Russia is now 537,210, despite the lowest count reported on Monday since May 21, the country’s emergency task force said in a daily report.

Although Russian authorities sound optimistic and are gradually relaxing restrictions, the daily growth in cases continues to hover over 8,000 daily.

During the last 24 hours, the virus claimed lives of 143 people, raising the death toll to 7,091, the emergency task force said.

Meanwhile, at least 4,489 recoveries were registered since yesterday, taking the total figure to 284,539, it added.

Russia’s chief sanitary officer Anna Popova said Russia has seen two epidemiological processes: the first in Moscow, and the second in the other regions.

Moscow, which first faced the virus outbreak, has passed its viral peak, while the rest of Russia has yet to, she added.

Health Minister Mikhail Murashko called the situation “controllable” but said some restrictions will be maintained until a vaccine for COVID-19 is developed, perhaps sometime before the year’s-end.

Late May, the Russian government started to lift restrictions inside the country, saying the situation had stabilized, and proceeded to economic recovery measures.