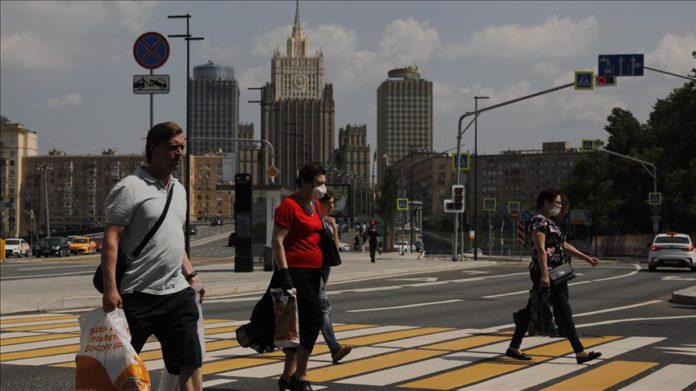 With Saturday’s new figures, the daily growth in coronavirus cases in Russia continues to hover over 8,000 daily.

On Saturday, Russia’s emergency task force confirmed another 8,706 new COVID-19 cases registered over the last 24 hours, saying the total number of people who contracted the virus rose to 520,129.

Over the same period, the infection claimed the lives of 114, raising the death toll to 6,829, it said in a daily report.

Recoveries reached 274,641 after 5,271 more people were successfully treated for the virus since yesterday, it added.

Russia’s chief sanitary officer Anna Popova explained the situation by saying there have been “two different epidemiological processes” inside the country.

She said at the beginning of the pandemic, Moscow, which first faced the virus outbreak, accounted for 67% of new daily cases versus 33% in the rest of Russia.

Today only 23% of new cases are seen in the Moscow region, which has passed the peak of morbidity, while the other regions, where the outbreak came much later, are reporting 77% of new daily cases.

As for the relatively low death rate, she explained it by the dominance of mild cases, revealed during proactive testing, deployed throughout Russia to find people at early stages of the disease.

On Monday, Russian Prime Minister Mikhail Mishustin announced a partial opening of the borders for international travel, while Moscow Mayor Sergey Sobyanin lifted the lockdown on the capital.

Since originating in China last December, the pandemic has claimed over 426,000 lives in 188 countries and regions. The US, Brazil and Russia are currently the world’s worst-hit countries.