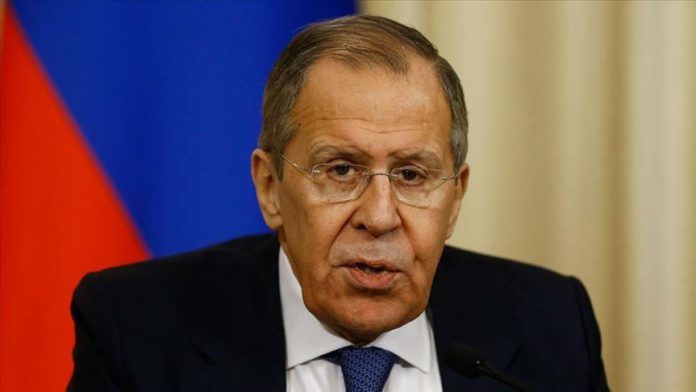 “What is happening in Belarus is a struggle for the post-Soviet space, which began after the Soviet Union ceased to exist, and the latest example of which were the events in Ukraine,” Lavrov said in an interview with Rossiya24 TV-channel.

“The statements from the Western capitals show their interests lie behind the election,” Lavrov said.

“If it was so, they would use the existing international legal framework to argue the results, including through international bodies, established to observe the election and to register the admitted violations.”

One of such bodies in Europe is the Office for Democratic Institutions and Human Rights (ODIHR) of the Organization for Security and Cooperation in Europe (OSCE), he said.

Lavrov called “untrue, to put it mildly” the ODIHR statement that Belarus was late with the invitation to observe election. The only obligation of Belarus, like any other OSCE participating country, is to “invite international observers to national elections”. The terms for sending invitation are unspecified, he added.

He also slammed the ODIHR for its “differentiated approach” of observing election depending on geographical principle, saying many times it decided not to observe elections in the Baltic States although hundreds of thousands of people in Estonia and Latvia are deprived of the right to vote, having “a shameful status of ‘non-citizens’ for the EU”.

He said Russia repeatedly proposed to introduce “once and for all” clear rules for election observation, including on number of observers and terms of sending invitation. But, the proposal met a refusal with the explanation that “ambiguity and flexibility” are “golden standard that should be cherished in every possible way”.

“There is no need to explain that such ‘ambiguity’, preserved in the functions of the ODIHR, is necessary for one purpose – to manipulate it [the ODIHR] in line with the understanding of those who make up the backbone of the staff there,” Lavrov said.

If the ODIHR strived to perform its functions, it would go and observe the election in Belarus and now would have more reasons to speak about the violations, he added.

Lavrov admitted that the election in Belarus was not ideal. However, he stressed that it is wrong to use it to undermine mutually-respectful dialogue between the authorities and society, and to attack the law enforcement.

As for the calls asking the EU to play a mediator role between the protesters and the authorities, Lavrov said “not to forget how such a mediation ended up in Ukraine in 2014”, when protesters pushed President Viktor Yanukovich to flee the country several days after sealing a reconciliation plan with the opposition under the EU guarantees.

“The wise Belarusian people can sort out the current situation. I do not see a lack of readiness on the part of the authorities for dialogue. I hope that the same readiness will be shown by those who are dissatisfied with the results of the elections for one reason or another,” he said.