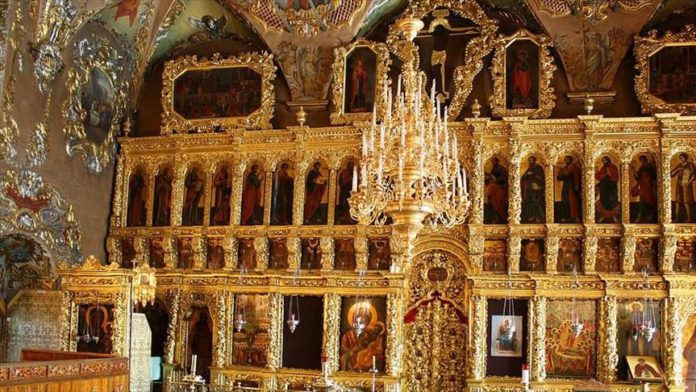 A new Orthodox cathedral dedicated to Russia’s armed forces has been opened to the public to mark the 75th anniversary of the Allies’ victory in World War II.

Building a cathedral as a memorial to a military triumph was chosen as a reminder of the religious persecution that started with the 1917 communist revolution in the Soviet Union but began waning during the war.

The cathedral had been scheduled to open its doors in May, when Russia was also planning to hold a military parade, but both events were postponed to last week due to the coronavirus pandemic.

Built in the middle of the Defense Ministry’s Patriot exhibition park, some 55 kilometers (34 miles) from the capital Moscow, its location also holds historical significance as it was the site of 1941 Battle of Moscow, in which Nazi Germany suffered its first major military loss, a milestone towards its eventual defeat.

“It is intended not only to immortalize the memory of dead heroes but also to become a visible symbol of the strength of the Russian Army’s spirit, its selfless service to the people and the Motherland,” said Patriarch Kirill of Moscow and All Russia, head of the Russian Orthodox Church.

Explaining the idea behind building the church, he said it was faith in God that supported the Russian people in their most trying times, helped them to overcome difficulties, and inspired them to protect their kin.

This cathedral is believed to act not only as a spiritual hub but also as a memorial where generations to come will pray for soldiers, both the dead and the living.

The priests serving in the cathedral have been drawn from the ranks of the military. Since they have firsthand knowledge of issues related to military personnel, they are expected to assist visitors and answer their questions.

Mosaic of innovation and tradition

Built mainly of metal and glass, painted in khaki, and with architectural motifs evocative of armor, externally the cathedral resembles a military machine.

Designed in a monumental Russian style, it is complemented with innovations such as armed images and sculptures of saints.

The chandeliers in the front entrance are in the form of crossed swords and shields. Two sculptures of saints armed with swords, looking like guards, welcome visitors as they step into the holy place.

The cathedral is divided into four sections, each dedicated to a different branch of the armed forces – ground, aerospace, navy and strategic missile forces – and their patron saints, depicted as mosaic icons with weapons.

Along the perimeter, the cathedral is decorated with mosaics of battle scenes drawn from military history, including those of World War II, with soldiers in Soviet-era military uniforms.

The central helmet-shaped dome which houses the icon of the Savior Not-Made-By-Hands also refers to the military theme. It was pictured on the banners of Russian Army campaigns for over a half-millennia, starting from the 1380 Battle of Kulikovo up to 1914, the outbreak of World War I.

The cathedral was built through public donations, with officials and members of government and parliament also contributing.

According to the cathedral’s father superior, Bishop Stefan of Klin, President Vladimir Putin himself donated the image of the Savior Not-Made-By-Hands.

Ahead of its construction, there was controversy about the cathedral, amid reports it might include images of Putin, Defense Minister Sergey Shoygu, and Soviet leader Josef Stalin.

According to chief architect Dmitry Smirnov, the mosaics of the three were made in a workshop and the photos that appeared on the Internet were taken from there.

An artistic expert board decided to house them in the Museum of Military History rather than the cathedral, he said.

Asked about Putin’s reaction to the controversy over his picture, Kremlin spokesman Dmitry Peskov said that after learning about the mosaic, Putin said that “someday grateful posterity will appreciate our merits, but for now it’s too early.”

US deploys navy hospital ship to NY amid coronavirus