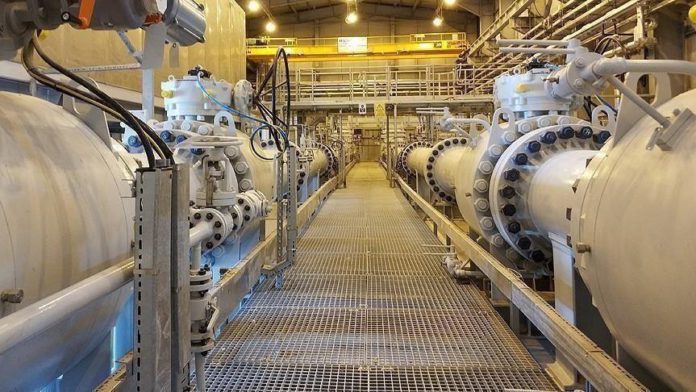 The way Russia is benefiting from the crisis created by the Nord Stream 2 natural gas pipeline project poses a problem for Ukraine, its foreign minister said Thursday.

“America and Germany have agreed on something, Poland and Ukraine have also agreed on something, but you and I, we all understand that the main beneficiary of the crisis created by Nord Stream 2 is the Russian Federation,” said Dmytro Kuleba, according to the Ukrainian news agency Ukrinform.

“And this is the main problem and the main question, the answer to which is currently unknown, so it is necessary to work on it,” he told a press conference in the capital Kyiv with his Hungarian counterpart Peter Szijjarto.

On Wednesday, the US and Germany announced they had reached an agreement on the controversial project that will see Berlin take extensive measures to assuage US concerns.

In exchange, the Biden administration will not reportedly impose further congressionally mandated sanctions on entities linked to the project, which is roughly 98% complete.

The US had long opposed the pipeline over concerns that it could be used by Russia to bypass existing gas lines through Ukraine.

On the deal, which will allow the completion of the pipeline from Russia to Europe, Kuleba said: “We currently have many questions on how the US-German agreement could reduce security risks for Ukraine and Central European countries, associated with the launch of Nord Stream 2. We will be talking about this with the United States and Germany.”

“We’ve been always saying honestly that for us, Nord Stream 2 is first and foremost a security issue, and we would like that the wording in the German-American statement on security (would) be stronger,” he added.

Fighting between Ukrainian government forces and pro-Russian separatists in Donbass, eastern Ukraine has seen more than 13,000 people killed since 2014, according to the UN.

The region is one of several sources of friction between Russia and Ukraine, including Moscow’s 2014 annexation of Crimea, which Turkey, the EU, US, and UN General Assembly all view as illegal.

“The visit will affirm the United States’ unwavering support for Ukraine’s sovereignty and territorial integrity in the face of Russia’s ongoing aggression in the Donbas and Crimea, our close cooperation on energy security, and our backing for President Zelenskyy’s efforts to tackle corruption and implement a reform agenda based on our shared democratic values,” it said in a statement, using an alternate spelling for the Ukrainian leader’s name.

The invite marks an about-face from the last US president, Donald Trump, who suggested ending sanctions over the Crimea annexation and avoided giving Ukraine unconditional support vis-à-vis its much larger eastern neighbor.

Turkey: Marriages down, divorces up in 2019