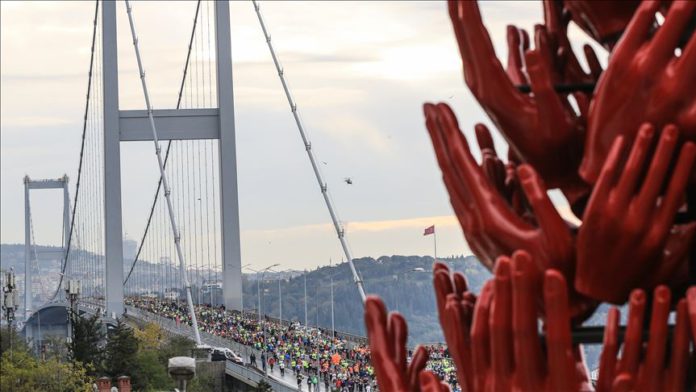 Turkey’s largest city hosted the Vodafone Istanbul Half Marathon — one of the top eight semi-marathons in the world — with measures against the novel coronavirus.

Participants this year ran 21 kilometers (13 miles) on the streets of Istanbul’s historical peninsula on the European side of the city bifurcated by the Bosphorus Strait across two continents. Professional competitors were limited to only around 2,500 due to the precautions against the virus.

Among those athletes on Sunday was Fatih Topcu, who also competes in triathlons and is a diver and climber, and has over 62,000 subscribers on his YouTube channel Asla Durma (Never Stop) where he explains how to begin running for new beginners.

For Topcu, 42, the run was easier than he expected: “It was a good race to see how the pandemic affected [me] after running a half marathon in [Turkey’s Mediterranean province of] Antalya before coronavirus measures were implemented.”

“It didn’t affect me much. I enjoyed this race very much as the virus made us miss running a bit,” added Topcu, who has run over 50 half marathons and six marathons over his career.

As the track was slightly different this year, according to Topcu, it gave the chance to run Istanbul’s historical peninsula completely.

For Topcu, Sunday’s run was one of the “best events I’ve ever run.”

“Although there were 2,500 people in the race, the fact that there was no density anywhere shows us the quality of the organization,” he added.

“My only sadness was that very few foreigners were able to compete due to the pandemic and they could not see this quality organization,” he said.

‘I was nervous before the run’

Topcu admitted that he was a bit nervous before the run, the thought of being among 2,500 people in the same environment was “a little scary.”

“The organizers found very good solutions,” he said. “Before and after the race, I didn’t wait in line anywhere. The start was completely in line with the pandemic rules and was very comfortable. Obviously, we can continue with the same rules after the pandemic.”

This year also saw the world’s first virtual half marathon with runners allowed to go 10 km or 15 km tracks via a mobile application.

On Sunday, just after the half marathon, Renay Onur, the general manager of Spor Istanbul, a subsidiary of the Istanbul Metropolitan Municipiality Museum that organizes the long-distance run, said in an email sent to all the participants: “We didn’t even think for a moment that the Istanbul Half Marathon, which we have organized for 14 years with pleasure, could be canceled.”

The event, originally scheduled for April this year, was delayed due to the coronavirus.

“Sports are the only thing that can gather the whole world around them whatever faith, language, religion, race you are,” Onur said.

“To keep these values ​​alive during the pandemic period with you, we chose to say, ‘we’re all here together, we’re healthy, we’re taking our precautions and choosing to continue life,’ as one of the biggest cities in the world that has experienced the pandemic.”

According to Onur, around 50 marathons have been canceled and the same amount of the running events delayed due to the coronavirus.

This year’s event involved precautions from the registrations and kit distribution phases and from the start of the race to the finish.

Athletes received their running kits from Istanbul’s Ataturk City Forest — an open area — to prevent the spread of the virus.

On Sunday, participants were allowed to use public transportation free of charge, showing their bib number.

Every runner had to use face-masks at the beginning of the run and they were allowed to take them off when they began running. At the end of the run, every athlete was given a new mask.

Though spectators were not allowed at the event this year, organizers prepared an area under a bridge for virtual viewing, placing speakers so runners could hear encouragement: “Run! You can do it! Faster!”

Now, Turkey’s largest city is getting ready to host its next major event under coronavirus measures, the Istanbul Marathon, on Nov. 8. Topcu says he is also looking forward to running in this long-distance competition, as well as in Ironman Turkey on Nov. 1 in Antalya.

Pakistani premier due in Beijing for Winter Olympics opening ceremony