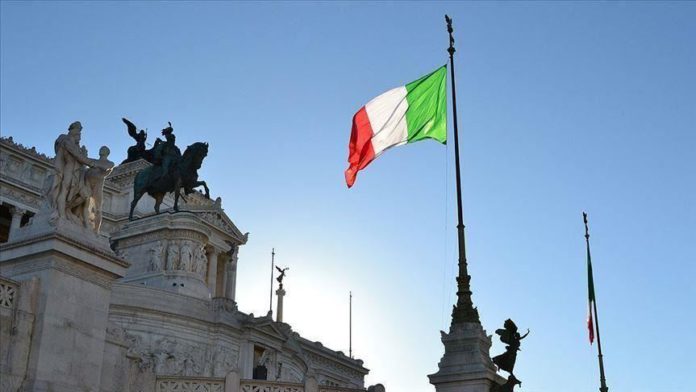 Hundreds of demonstrators blocked traffic and scuffled with police Saturday in central Rome as they protested against government institutions considered unfit to shield residents from the coronavirus pandemic fallout.

Waving national flags and wearing masks with Italian colors, protesters tried to reach the square facing parliament but were blocked by police in anti-riot gear.

After a few tense moments and scuffles, the group decided on a sit-in in front of the government building that paralyzed traffic in the city center.

“They are blocking us but we won’t leave,” protesters shouted as they sat in the middle of the street and accused politicians of betraying Italians.
Italy has been hit hard by the COVID-19 pandemic that has claimed more than 33,000 lives, forced a two-month lockdown and pushed its fragile economic into a new recession.

Despite a strong presence of far-right activists at the protest, demonstrators refused to be identified with a political side.

“They are killing us. They are killing people who worked all their lives and now have no money left,” said a 33-year-old woman from Trieste who declined to be named.
Edoardo, 57, had to close his bar for one day in Vicenza in the northern Veneto region to join the protest.

“The damage caused by the pandemic is huge and it’s hard to go back to normality. People are still scared. Nobody is spending,” he said. He calculated money his bar lost during the lockdown at around 16,000 euros.

The government headed by Prime Minister Giuseppe Conte is struggling to handle the economic emergency following the virus outbreak. Special measures approved to help residents cope with the fallout from the pandemic are considered insufficient by many.

Precarious and temporary workers with no safety net have been particularly hit, while businesses and retailers are struggling to restart operations.

Italian output is predicted to contract by more than 10% in 2020.