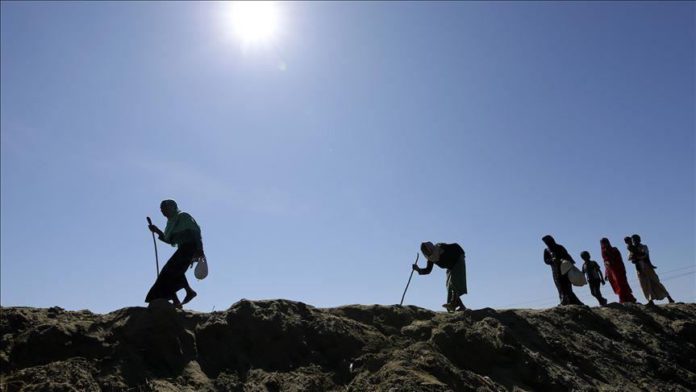 Twenty-nine Rohingya rights defenders across the globe in a joint statement Saturday claimed the persecuted people want peaceful co-existence with Rakhinese in Arakan State, which is now Rakhine.

“The show of solidarity between Rohingya and Rakhine people, who are both suffering under the Tatmadaw [Myanmar Army] is clearly making the Tatmadaw nervous and they are trying to instill discord between our two people,” said the statement.

Referring to rising tensions between Rohingya and Rakhine residents, the statement accused the Myanmar army of stepping up a “propaganda war.”

Quoting multiple and reliable sources, the statement said disturbing developments such as instigation to sow new discord between Rohingya and Rakhine residents have taken place in Rakhine State and online last week.

“It puts the life of the 600,000 remaining Rohingya in Rakhine State in grave danger, as well as all the Rakhine living there.”

As an example, it mentioned the case of Tun Khin, head of London-based Burmese Rohingya Organisation UK (BROUK) and said he also come under attack through fake Facebook accounts in recent days.

“Several accounts with Tun Khin’s name and photo have been published, where Tun Khin is portrayed as levelling accusations at the commander-in-chief of the Arakan Army, including taking funds from international bodies and governments. These posts have been watched tens of thousands of times shared through Opera Mini, a Burmese military video channel,” it said.

The statement urged the international community “to bring this up urgently with the Burmese government.”

Pointing to the weak role of the international community, it added: “The only price the Tatmadaw has paid for genocide of the Rohingya has been a small number of soldiers being banned from enjoying holidays in the EU and USA.”

“We call on all countries to support and defend the tentative steps of trust building which have been taking place between Rohingya, Rakhine and other communities in Rakhine State, and make public statements, ensuring that communities are aware of the Tatmadaw dirty tricks and campaigns.”

The statement claimed, “the genocide against the Rohingya is ongoing, and the Rakhine people are being subjected to war crimes and crimes against humanity.”

More than 34,000 Rohingya were also thrown into fires while over 114,000 others were beaten, said the OIDA report, Forced Migration of Rohingya: The Untold Experience.