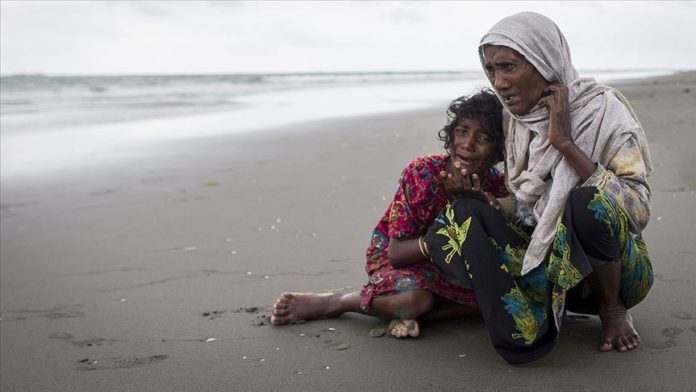 A group of Rohingya women kept on a remote Bangladeshi islet in the Bay of Bengal for months have been on hunger strike for the past five days, demanding that they be taken back to their families living in refugee camps in Cox’s Bazar, southern Bangladesh.

Some 306 Rohingya, including at least 33 children and more than 100 young girls and women, have been confined to the Bhasan Char islet off Bangladesh’s southwestern coast since early May.

They were moved to the island after being stranded in the Bay of Bengal for weeks during a failed attempt to migrate to a third country.

Bangladesh, which is host to over a million Rohingya refugees, hopes to relocate the persecuted community to the tiny islet despite widespread criticism of its plan.

“The Rohingya people are living like prisoners on that island. They are facing many problems, and the authorities have taken away their mobile SIM cards to keep them in complete isolation,” Ansar Ali, a Rohingya living in the Kutupalang camps in Cox’s Bazar, told Anadolu Agency.

“We’re in extremely worried for them, especially the young women who have been separated from their families for more than four months and are leading an unsafe life on the island.”

Bangladeshi authorities cite the coronavirus risk as the reason for not taking the refugees back to the crammed Cox’s Bazar camps, home to more than 1.2 million Rohingya who fled the August 2017 military crackdown in Myanmar’s Rakhine state.

However, Khin Maung, founder and executive director of the Bangladesh-based Rohingya Youth Association, said the people on the island have been in isolation for more than three months and “should be immediately reunited with their families.”

‘Dhaka yet to decide’

A Bangladesh navy official told Anadolu Agency that most of the Rohingya on the island are desperate to return to the Bangladesh mainland.

“They have been separated from their families for months so it’s very normal that they want to return to them,” said Cmdr. Abdullah Al Mamun Chowdhury, director of the Bhasan Char Rohingya Camp Rehabilitation Project.

“We have already informed the government about the situation and are awaiting their decision. The instant we get directions, we will act accordingly. However, it may take us 10 to 15 days to take them all back.”

At a cost of about $272 million, Bangladesh has developed 120 cluster villages at Bhasan Char and plans to relocate 100,000 Rohingya there in the first phase.

However, the Rohingya community has already opposed several such attempts and international agencies, including the UN, have said that any relocation must be voluntary.

Chowdhury said the facilities on the island were adequate but the “problem lies in the fact that they cannot mentally adapt to this isolated island.”

Mahbub Alam Talukder, Bangladesh’s relief and refugee commissioner, told Anadolu Agency that the government has yet to decide on “the return of the Rohingya settled at Bhasan Char.”

“The government hasn’t given us any directives on the matter so far. All we know for now is that they have been living there in a better environment under the care of the Bangladesh naval forces,” he said.

The Rohingya, described by the UN as the world’s most persecuted people, have faced heightened fears of attacks since dozens were killed in communal violence in Myanmar in 2012.

As many as 18,000 Rohingya women and girls were raped by Myanmar’s army and police, and over 115,000 Rohingya homes were burned down, while 113,000 others were vandalized, it added.