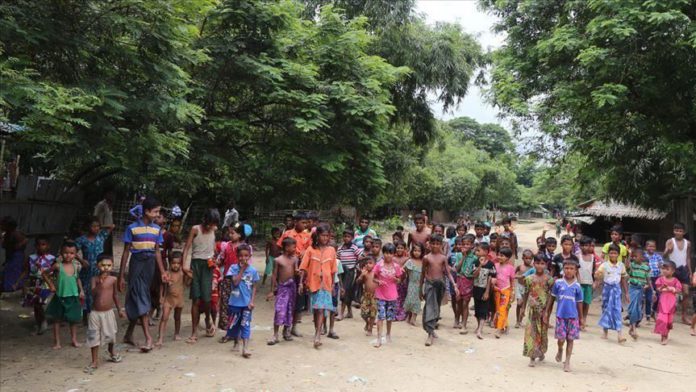 Rohingya in Bangladesh’s crammed camps are celebrating a forlorn Eid al-Fitr for the third straight year following a mass exodus in August 2017.

“Eid does not carry any significance for us in this stateless life. But we have to pretend to be happy just for our kids,” Mohib Ullah, a Rohingya community leader at Kutupalang camp, told Anadolu Agency.

Pointing to an uncertain future in Bangladesh, Mohib said they do not see any hope of a peaceful return to their homeland in the near future, and a new generation is growing up “without any education, without any dreams.”

“We are on the verge of losing our existence as an independent nation in our motherland, where we had been living for centuries. Our young generation is suffering from an identity crisis. How can we dream of celebrating Eid?”

More than 750,000 Rohingya Muslims fled a brutal military crackdown in Myanmar’s Rakhine state to Bangladesh, raising the total number of the world’s most persecuted people to over 1.2 million in the host country.

Several attempts of peaceful repatriation of Rohingya to their homeland have failed.

The persecuted Rohingya have been demanding full citizenship rights, while officials from Myanmar’s capital Naypyitaw have been insisting that they return with National Verification Cards (NVCs) during talks held in Bangladesh.

Rohingya have labeled the NVC as part of the ongoing genocide.

The little festivity seen in the sprawling makeshift Rohingya settlements in the previous two Eid celebrations in 2018 and 2019 was absent this year due to the spread of the novel coronavirus in the camps.

As of Sunday, at least 21 Rohingya refugees had been infected by the virus. All of them have been shifted to isolation centers inside the camps while their families have been moved to separate centers.

In addition, more than 20,000 Rohingya who have been living in the same blocks in the camps with those infected have been locked down. Rohingya settlements are divided into 34 camps comprising many blocks.

Panic is prevailing throughout the camps as experts and rights bodies have been warning of a dramatic spread of the virus in the squalid camps where 40,000-70,000 refugees are now living per square kilometer, according to the World Health Organization.

“We are living with our all neighbors together. Our tents are in a row. We always see each other whenever we come out of our tents. We have no restrictions. We will perform our Eid prayer together at our small mosques inside the camps,” he said.

Kashim said there is no social distancing inside the camps.

“We want to enjoy our Eid together with all our friends.”

On the grounds of ensuring safety and curbing crime, Bangladeshi authorities have erected barbed wire fences around the Rohingya camps, ignoring the concerns of rights bodies.

Moreover, nearly 80 Rohingya have been killed by Bangladeshi law enforcers since August 2017 in crossfire with terrorists and in their drive against criminals, according to Rohingya rights body the Free Rohingya Coalition (ERC).

Use of the internet and mobile networks has also been limited in the Rohingya camps for the same reasons.

“Muslims under lockdown can still greet each other [in Eid] over group video calls, but Rohingya in Bangladesh have no such facility as the internet has been shut down for many months. This is very sad! When the people suffer globally, our suffering is a bit more than them,” ERC co-founder Nay San Lwin told Anadolu Agency.

The refugees have nothing to celebrate besides Eid, but this year, they are unable to celebrate due to the pandemic, he added.

In a previous interview with Anadolu Agency, Bangladesh’s Home Minister Asaduzzaman Khan, however, said the mobile network and internet had been scaled down partially in camps for the safety and security of Rohingya.

Israel: No citizenship for Palestinians in annexed lands