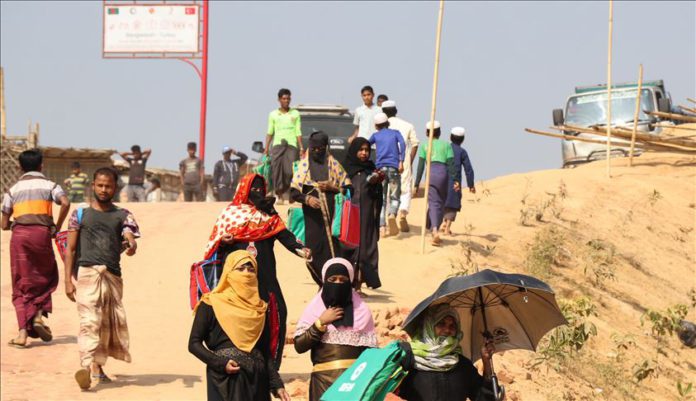 Rohingya refugees in Bangladesh’s crammed camps Tuesday commemorated the third anniversary of genocide with silent prayers within tents due to the coronavirus pandemic and the host country’s embargo on gathering at camps.

More than 1.2 million Rohingya have been living in makeshift settlements in Bangladesh’s southeastern district of Cox’s Bazar for years.

Since 2018, the world’s most persecuted people has been observing Aug. 25 as “Rohingya Genocide Remembrance Day” as on the same day in 2017, Myanmar army began a brutal crackdown against Rohingya civilians, forcing more than 750,000 people to flee to neighboring Bangladesh within a few days.

After surge in coronavirus cases, the authorities imposed more restraints in the overcrowded camps to contain the spread of the pandemic.

“Honoring the decision of the host country and considering the pandemic, we are observing the genocide day this year through silent prayers to Almighty Allah for our martyrs and oppressed people,” said Rohingya community leader Rahmat Karim.

Meanwhile, 10 Rohingya rights organizations, including Arakan Rohingya Society for Peace & Human Rights and Rohingya Women for Justice and Peace, in a joint statement urged the UN to recognize Myanmar’s atrocities against Rohingya as “Genocide”.

“We still have not got our rights and still all Rohingya people and other ethnic groups in Myanmar are continuously facing this threat. It’s because still the UN officially has not declared it as GENOCIDE,” said the statement.

Referring to the long cycles of persecutions faced by Rohingya, it added: “We, Rohingya people, have been under the threat of hidden genocide through a systematic plan and the structural intention of the Burmese government and Burmese extremist politicians since 1960 after General U Ne Win seized the power to rule the country.”

The statement accused the Burmese [Myanmar] government’s “joint armed brutal groups” of mass killing, burning down the houses including villages and seminaries, throwing the children into fire, burning people alive in houses by locking doors, slaughtering both men and women, robbing the properties, raping the underage girls and women and arresting people without any reason.

The Rohingya diaspora also urged the world’s actors including the UN, EU and other influential organizations to ensure justice for Rohingya.

“Please stand by innocent Rohingya, and then hopefully we can return to our homes with our denied equal rights,” the statement said.

On Aug. 25, 2019, thousands of Rohingya held a peaceful rally at the biggest Kutupalang camps in Cox’s Bazar to mark the “Genocide Day” and pray for their martyrs.

After the gathering, the Bangladesh government imposed an embargo on any gathering at any of the 34 refugee camps in Cox’s Bazar to avert any untoward incident.