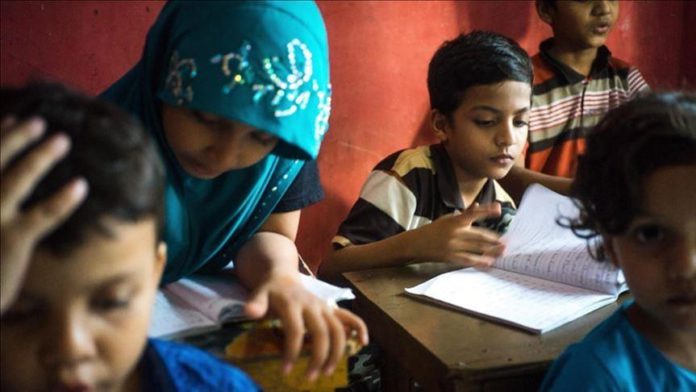 Amid mounting frustration, Rohingya rights groups and experts have called on the Bangladesh government to provide refugees with formal education, which is essential for their reintegration and repatriation to Myanmar.

Local rights groups estimate that over half of the 1.2 million refugees stationed in Cox’s Bazar, Bangladesh are children and youths. More than 700,000 Rohingya fled in 2017 after a military-led crackdown in Rakhine state in which villages were razed, women raped and thousands killed.

Although Rohingya children between the ages of six and 14 have been included in the non-formal education programs initiated by the government and other non-profit organizations, a majority is not a part of any initiative, according to Cox’s Bazar CSO-NGO Forum.

“There is no formal education for our children. We want education for the future of our next generations and reintegration in the society after repatriation,” Khin Maung, the founder of the Rohingya Youth Association, told Anadolu Agency. He resides in Cox’s Bazar.

“Our first priority is to return to our motherland with full rights and dignity, we don’t want to live as refugees anymore.” Rohingya do not have citizenship rights in Myanmar.

Ro Nay San Lwin, co-founder of the UK-based Free Rohingya Coalition, said Bangladesh thinks the Rohingya will stay if they are given their due rights.

“This is not true. We belong to Myanmar. We will definitely go back to Myanmar once the situation changes,” he said.

Louise Donovan, a communications officer at the UNHCR office in Bangladesh, said “further livelihoods and skills training opportunities would provide refugees with a sense of purpose, autonomy and dignity while they are in Bangladesh, while preparing them for reintegration when conditions allow them to return to Myanmar.”

CR Abrar, a professor of international relations at Dhaka University, said Bangladesh should provide formal education to refugee children in line with the Convention on the Rights of the Child, of which Bangladesh is a signatory.

“It’s our responsibility to provide them formal education for their reintegration, and if we don’t want them to be a burden on our shoulders,” he said. “Funds will come from donor agencies. We need a policy.”

He said informal education is good but is not serving the purpose of sustainable reintegration and repatriation to Myanmar.

The government, meanwhile, says it is working toward that goal, but refuses to provide certificate-based education offered to other citizens.

Md Delwar Hossain, the head of Myanmar wing at the Bangladesh Foreign Ministry, told Anadolu Agency that “Rohingya children and youth must be provided education under a curriculum allied with Myanmar and their language so that it can be easy to avail Rohingya’s demand of Myanmar citizenship.”

“In January 2020 we got a draft policy following meetings with a UN agency concerned for child education, but it was not comprehensive enough to go ahead. We asked them to come up with a complete plan, and are still waiting to hear from them,” the official added.

Bangladesh and Myanmar signed an agreement in 2017 for the repatriation of the Rohingya, but to no avail. The situation drastically changed after a military coup in Myanmar on Feb.1.

Dhaka has now called on the international community, including the UN, for support and involvement on the matter. Experts say the UN can also help in introducing a globally-recognized education certificate for the Rohingya.