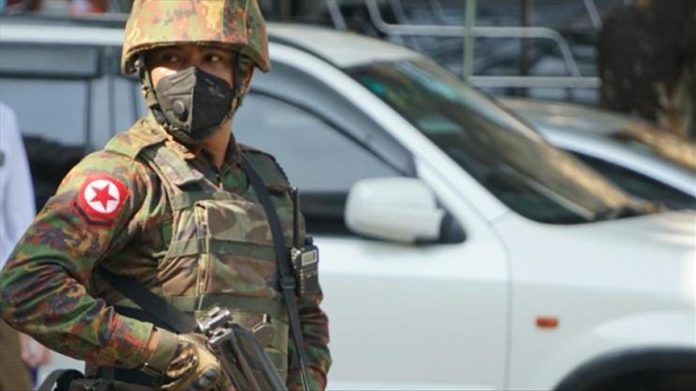 Rohingya refugees in Bangladesh have opposed the military coup in their home country Myanmar, saying they are worried about the safety of their loved ones.

“We fear that Tatmadaw [Myanmar’s army] will launch an operation again,” 35-year-old Muhammad Ansar, one of the more than 750,000 Rohingya who fled brutal violence and persecution following an army crackdown in 2017, told Anadolu Agency. “We don’t believe that it will ever leave power.”

Thousands of Muslim men, women and children were killed, thrown into fires, and raped in the Buddhist majority nation.

Bangladesh is hosting more than a million Rohingya at cramped makeshift camps in Cox’s Bazar, which is considered the world’s largest refugee settlement. Nearly 600,000 of them, however, still reside in the Southeast Asian country, but without citizenship and voting rights.

Myanmar’s military is now in charge and has declared a year-long state of emergency. Leaders including Aung San Suu Kyi, who has been charged for breaching import and export laws and possession of unlawful communication devices, remain under house arrest.

“We are unable to contact our relatives in Rakhine due to frequent disruption of mobile network,” said Jumalida Begum, 36. “We are hearing the military may launch a fresh crackdown. I am worried.”

Rahmat Karim, who is 57, said all hopes to return to the homeland have been shattered after the Feb. 1 military take over. “It seems totally impossible now.”

Myanmar had earlier said it was committed to the repatriation as per a bilateral agreement with Bangladesh.

Amir Ali, a young student, said it was Suu Kyi’s mistake to work and collaborate with the military, which is eligible for 25% of seats in parliament. “We have no hope of any good from the military,” he said.

Suu Kyi at the International Court of Justice in 2019 denied allegations that the military had committed genocide. She won the Nobel Peace Prize in 1991.

“We do not support the coup. We were, and are always in favor of democracy,” Mohammed Ayyub Khan, who heads the Myanmar-based Rohingya Solidarity Organization, told Anadolu Agency.

He, however, added that both civilian and military regimes persecuted the Rohingya equally. “Even Suu Kyi’s National League for Democracy failed to stop the genocide in Rakhine,” Khan said.

He expressed the resolve to continue the struggle for the rights of the minority community, irrespective of who is in power.

Most Democrats think US needs to step up support for Palestine:...

'We may not be richest, but we're most generous'