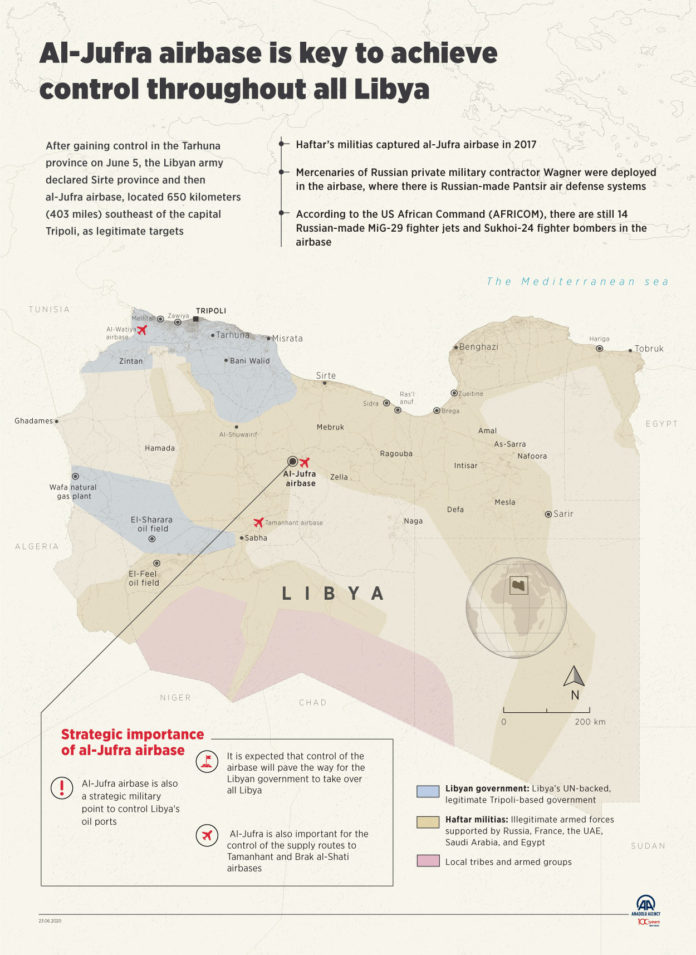 Al-Jufra airbase, which was captured by the militia of warlord Khalifa Haftar in 2017, still accommodates Russian aircraft and Wagner mercenaries.

According to data of the US command in Africa, AFRICOM, there are still 14 Russian-made MiG-29 fighter jets in the airbase, as well as Sukhoi-24 bombers.

Haftar also brings recruited foreign mercenaries from African countries such as Sudan and Chad to the airbase for a short training before dispatching them to fight against the Libyan army in the western part of the country.

Russia is believed to have the intention to establish a military base in al-Jufra, a naval base in Sirte, and to take over Ghardabiya International Airport.

It is widely believed that the Putin administration seeks to do the same thing in Libya as it did in Syria by establishing a naval base in Tartus and an airbase in Latakia.

According to Marine Corps Brig. Gen. Bradford J. Gering, a commander of AFRICOM, Moscow seeks to surround European countries by deploying long-range rockets to the west of Russia and establishing military bases in the east and south of the Mediterranean.

However, Haftar militias, which retained air superiority, soon took back these important ports from the Libyan government forces. Thereafter, they also occupied the Al-Jufra airbase.

Al-Jufra is also important in terms of controlling the supply routes to Tamanhent and Brak al-Shati airbases.

Military experts agree that Sirte must be cleared from the Haftar militia in order to maintain control of al-Jufra.

Lucrative oil ports, Al-Sidra and Ras Lanuf energy terminals have a combined production capacity of some 600,000 barrels of oil per day.

The Libyan government wants to return to the basis of the Skhirat agreement inked on Dec. 17, 2015, by which Haftar’s militia will have to withdraw from Sirte, al-Jufra and Fezzan.

Liberating Al-Jufra airbase will allow the Libyan government to control all of the country.

July 8, 2020
ANKARA  The Turkish Republic of Northern Cyprus (TRNC) criticized the US on Wednesday for including Greek Cyprus in its International Military Education and Training Program. ...

July 8, 2020
ANKARA  Uruguayan star Luis Suarez helped Barcelona beat Espanyol in the Spanish La Liga on Wednesday with a 1-0 score.  Neither team managed to break the...

July 8, 2020
BAKU, Azerbaijan  Four members of Turkey's Coronavirus Scientific Advisory Board visited Azerbaijan on Wednesday to support the country's fight against the novel coronavirus.  They were welcomed...

July 8, 2020
PARIS France's newly appointed interior minister is in hot water after only three days on the job.   Gerald Darmanin is currently under investigation for a complaint...

July 8, 2020
BELGRADE, Serbia Thousands of protesters took to the streets of Serbia’s capital again Wednesday after the government moved to impose new measures to curb a...