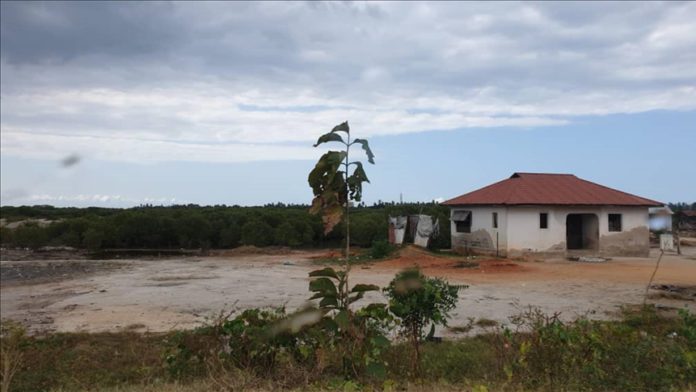 Driving on slick tarmac across a vast expanse of wetland in Dar es Salaam, the scale of destruction from surging seawater is vividly clear.

An abandoned home with French-styled furniture sinks in water infested with green algae. An old Mercedes stands immobile in knee-deep water. A maze of abandoned apartments with a tiled red roof is engulfed with sea marshes.

As the afternoon sun dazzles Ununio beach, the Indian Ocean is moving inland in a less obvious but more destructive way.

Across the sandy beach, rising tides increasingly threaten posh homes and businesses, some of which are already swallowed in the wetland.

Driven by the intense shift of climate coupled with powerful storms, the sea level in the smoke-belching city is rising rapidly, creating powdery patches that destroy buildings and kill natural vegetation.

Adding to the peril, dry spells experienced in Dar es Salaam have reduced the natural ability of most rivers to replenish groundwater aquifers from creeping salty water.

Seawater intrusion is the movement of saltwater into freshwater aquifers, resulting in tainting fresh water.

The phenomenon which happens in the event of reduced streamflow, ostensibly due to severe drought or sea-level rise, is alarming across the east African coast, threatening freshwater sources.

From Mtwara to Pangani to Rufiji, coastal communities are increasingly braving salty water that affects ground aquifers and destroys buildings.

Saltwater, pushed inland from the Indian Ocean, is responsible for tainting fresh groundwater and causing efflorescence, which causes wall plasters to crumble.

Scientists have linked the problem to climate change as higher seas inundate wetlands and low-lying areas, thus increasing the salinity of rivers and underground water aquifers.

Globally, saline intrusion, which is a symptom of rising population, increasing groundwater use, rapid urban sprawl, and surging demand for freshwater, has affected 1 billion people, who rely on groundwater for drinking and irrigation.

At the mangrove-fringed Kunduchi estuary, mud-slides are perpetually oozing from the wetland making it extremely dangerous for families to live in their homes.

Jackson Tesha, whose home is close to the estuary, had first-hand experience of rising seas.

“I am very worried for my family. Whenever a storm hits we spend sleepless nights,” he told the Anadolu Agency.

As you stroll across the posh neighborhood of Ras Kilomoni, saltwater has percolated deep into the coastal vegetation, killing natural trees. Mangroves, which act as buffers, are the only trees standing in the area due to their tendency to tolerate salty water.

In the neighboring Mbezi beach area, the rising Indian Ocean is posing an existential threat to affluent families. Beachfront homes are increasingly gobbled up by advancing marsh, surveyed plots engulfed with salty water, menacingly moving from the sea.

While residents try to fight the advancing wetland, their efforts are in vain.

Rashid Kambi, 65, who grew up in Ununio in the late 1960s, said the inexorable advance of the ocean is the price he is paying for living near the water’s edge.

“This is a very serious problem which directly threatens our very survival,” he said.

Kambi, who stays in a low-lying home with a tainted corrugated roof, however, does not know the root cause of the problem.

“Forty years ago, the sea was far away from my house, but look it is just here,” he said.

Further north at the flood-prone Nyaishozi area, many “for lease” signs stand in front of homes with visible watermarks on their walls.

“This area is flooding because waterways are blocked by homes,” said Mponie Mwaluseke, a Dar es Salaam-based agro ecologist.

“When saltwater seep into the soil before the rising sea becomes obvious, we call it the invisible flood,” he said.

Dotto Mnyenyelwa has lived at Kunduchi all his life. The 71-year-old mason said his family no longer uses well water.

Mnyenyelwa said the rising sea that first intensified in 1987 is now rising faster than at any point in time.

Zakia Ibrahim, an anthropologist at the University of Dar es Salaam who works with grassroots coastal communities, said some people have become accustomed to using salty water but others are increasingly worried about their crumbling homes.

“They see their future is in danger,” she said.

As the sea continues to rise, the saline intrusion problem intensifies since rainfall has become erratic.

Despite the assertion that sea rise is the main cause of coastal inundation, scientists say increasing human activities have a role to play.

“When fresh water depletes because of overuse, salty seawater seeps in,” said Mwaluseke.

As part of its broader push to improve water supply in the city, the government is aiming to increase surface water sources from 276,000 cubic meters per day to 576,000 by 2032.

The implementation of this plan, the government says will have a positive impact since it can potentially reduce groundwater exploitation and reduce seawater intrusion.

Because groundwater is the main source for domestic use in Dar es Salaam, the government drilled hundreds of boreholes to help residents in Kindondoni and Temeke districts.

Although the majority of city dwellers rely on groundwater supply, experts say poor development of shallow and deep aquifers increases the risk of seawater intrusion.

Silvia Macchi, professor of Urban Planning at Sapienza University in Italy who conducted research in Dar es Salam, said people living in the coastal plain are facing limited access to freshwater due to seawater intrusion in the shallow aquifer.

“Local residents are developing practices such as rainwater harvesting and changing livelihood strategies to deal with new environmental challenges,” she told Anadolu Agency.​​​​​​​