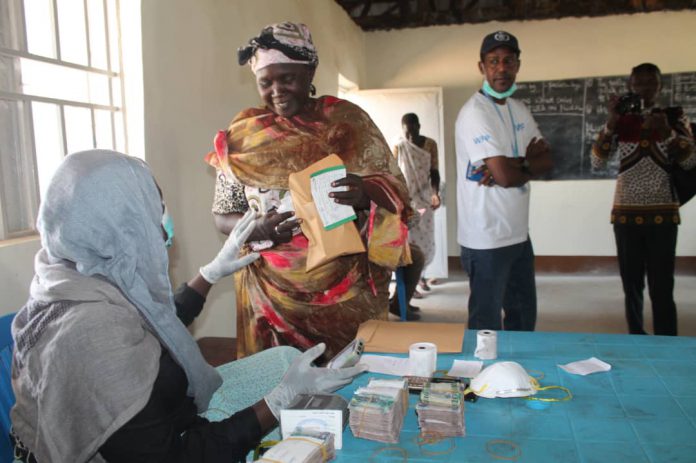 Although some UN agencies have been disbursing cash and food to help South Sudan’s starving population, a plague of locusts and the lockdown to stem the spread of COVID-19 have brought additional woes to a large population already at the brink of hunger before the new harvest.

The landlocked East-Central African nation witnesses the hunger season every year from May to July. Some 6.5 million people – more than half the population – faces hunger in the country every year.

Fearing that the numbers may jump this year due to the lockdown, UN officials have called for generous donations for the country, which recently emerged from the shadow of armed conflict.

Speaking to Anadolu Agency, many people in the capital Juba said they struggle to purchase food or pay bills like rent.

“People lack water in the residential areas, there is no soap, there is a lack of money,” said a person who identified himself as Mayen.

Tomson Phiri, spokesman of the UN’s World Food Program (WFP), said that they are providing food assistance to nearly 150,000 people in Juba.

He said that the initiative has been revamped to ensure compliance with COVID-19 restrictions. In addition to disbursing cash or food to people, the UN official said they are imparting awareness about pandemic and skills in areas such as nutrition, hygiene, food handling, and preservation.

According to him, the scheme is aimed at to cushion struggling families from the impact of the pandemic.

“WFP and its NGO partners have changed their food distributions to reduce congestion, and limit the risk of infection, staggering attendance, employing layouts to allow for physical distancing and adapting distribution cycles to reduce the need for large gatherings,” said Phiri.

He disclosed that at the distribution sites they have put in place measures, including health screening of staff, handwashing stations, and educating communities on prevention measures.

“WFP will need to support families and communities who in the past did not need help because the lockdown has increased the number of people in need.” said the WFP official.

He predicted that large urban areas, such as Juba, could be new epicenters of any COVID-19, thereby, inflating the number of those requiring assistance up to 1.6 million.

Emiliemnne Cyuzuzo, World Vision food and cash assistance project manager, said that they are giving some training and awareness about the pandemic to communities before they are given money or food.

Admitting what her organization was doling out was not enough to cover all the needs, she asked donors government to come up with assistance to help vulnerable South Sudanese.

Asenjo Betty, who used to sell wood in the market till the lockdown held her back is among 150,000 citizens, who have received money to buy food.

A single mother of eight children, she says the money is not enough to buy food to feed her entire family.

But there are others, who say the money is benefiting them, not only to buy food but also to expand businesses.

Agnes Sunday, 50- year- old mother of seven children, said that she stocked food with the money to feed her family.

Sunday is engaged in laundry business over the past three years to earn a living.

She received 30, 000 South Sudanese pounds ($100) which she believes will help her family during this partial lockdown.