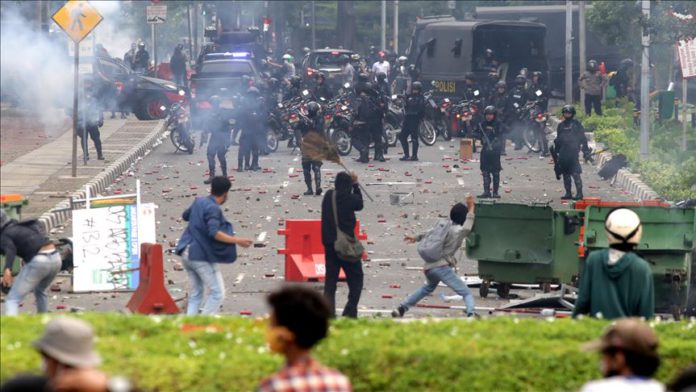 Riots broke out between police and demonstrators on Thursday as thousands gathered in Indonesia’s capital to protest a new law that changes the country’s labor and investment rules.

Police fired tear gas and pushed back protesters who tried to move towards the State Palace in Jakarta.

Clashes also broke out in other parts of the country, including the cities of Tangerang, Batam, Malang, and Bandar Lampung.

Labor unions and students have taken to the streets in protest against the Job Creation bill, which labor groups see as a “serious threat” to worker’s rights, according to the Confederation of Indonesian Workers Unions.

The bill passed on Monday includes legislation changes to revise dozens of laws in key sectors such as labor and tax. It has drawn criticism from various circles for disregarding workers’ rights and environmental protections.

Police have warned that the demonstrations are not permitted under the current COVID-19 safety rules in place.

Remy Hastian, coordinator of the Indonesian Student Executive Board alliance, said the controversial bill favors employers and threatens the rights of workers, so the government must annul its ratification.

“We all agree on rejecting this bill and seeking other alternatives like a judicial review, and urge the president to issue a Government Regulation in Lieu of a Law,” he said in a statement.

The government, however, claims the law aims to remove red tape and is part of efforts to open the economy to more foreign investment.

‘Police must refrain from repressive actions’

Global rights group Amnesty International criticized the use of force and arrests of hundreds of protesters since demonstrations picked up on Tuesday.

In a statement, the group urged Indonesian authorities to stop the use of excessive force against protesters, stressing that people’s right to demonstrate must be respected.

Usman Hamid, executive director of Amnesty International Indonesia, said the protesters are exercising their right to freedom of expression and peaceful assembly.

“The authorities must allow every member of the community, all workers, farmers, and students, to hold demonstrations freely and peacefully,” he said, calling for an end to use of unnecessary and excessive force.