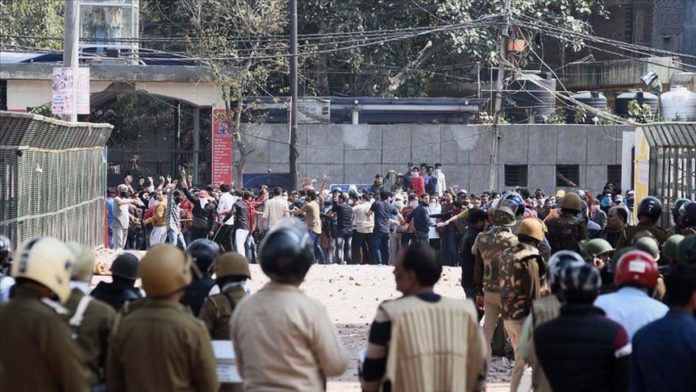 A global rights watchdog on Friday demanded an investigation into allegations of human rights violations by the Indian police during communal riots earlier this year in the capital Delhi.

An “investigative briefing” by the organization documented several human rights violations during the riots, which took place from Feb. 23 to 29, claiming at least 53 lives — mostly Muslims — and injuring more than 500 people.

The rights group interviewed more than 50 riot survivors, eyewitnesses, lawyers, human rights activists and retired police officers. It also analyzed several videos on social media platforms like Twitter to analyze the role of the Delhi police during the riots.

“The Delhi police reports to the Union Ministry of Home Affairs (MHA) and it is shocking that there has been no attempt by the MHA to hold the Delhi police accountable till now. This, despite several of their violations being live-streamed on social media platforms. There have been several news and fact-finding reports published during these six months documenting the violations,” said Avinash Kumar, executive director of Amnesty International India.

“But there has been no action taken against the police so far. This ongoing state-sponsored impunity that the Delhi police enjoy sends across the message that the police can commit grave human rights violations and evade accountability. They are a law unto themselves,” said Kumar in a statement.

The 20-page briefing documents “hateful political speeches” by political leaders, as well as the Delhi police’s inadequate response in preventing the riots and complicity and active participation in the violence.

“Delhi has witnessed two major communal violence incidents across a period of four decades – the 2020 riots and the 1984 Sikh massacre,” Amnesty said. “A common link between both the incidents is the human rights violations committed by the Delhi police.”