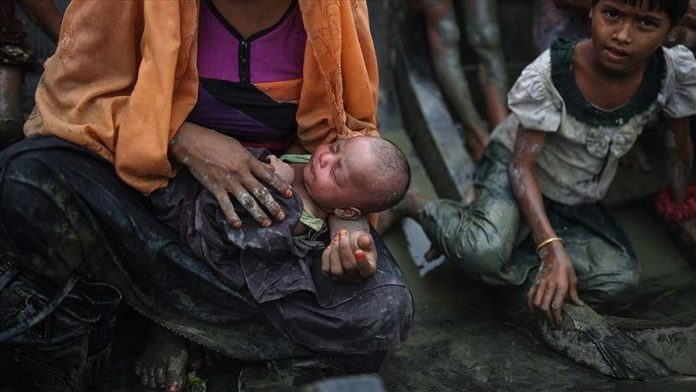 Two members of Myanmar’s military have admitted to the International Criminal Court (ICC) to perpetrating atrocities against minority Rohingya Muslims in the country’s western Rakhine State, a statement from an international rights group claimed Tuesday.

“Both men separately claimed to be acting on orders from senior commanders to ‘exterminate all [Rohingya],’ to ‘shoot all that you see and that you hear,’ and to ‘kill all’ Rohingya in specific areas,” Fortify Rights said in a statement.

Rights activists and experts have marked this as a major development in seeking justice for Rohingya against Myanmar authorities on genocide and ethnic cleansing allegations. They represent the first time such confessions implicated the Southeast Asian country’s armed forces in alleged mass killings, rape and crimes against humanity since reports of attacks on Rohingya emerged in 2012.

Speaking to Anadolu Agency, Matthew Smith, the chief executive officer of Fortify Rights, said the confessions would help the case against Myanmar’s army for persecuting Rohingya in the ongoing trial in the ICC.

“No perpetrators from Myanmar have ever officially been anywhere near the ICC, and now we have two perpetrators in The Hague who may become insider witnesses,” Smith said.

He added: “Significantly, both men were operational in two separate townships, simultaneously following orders under different commanders, which may indicate operational consistency between battalions, coordination and intent to commit genocide.”

According to the statement, Fortify Rights obtained two videos of the confessions of Private Myo Win Tun and Private Zaw Naing Tun.

Smith said both are in the ICC’s custody in The Hague, though the court has denied this.

“LIBs [Light Infantry Battalions] 565 and 353 were operational in Rakhine State during military-led ‘clearance operations’ against Rohingya civilians in 2016 and 2017,” it added, referring to the two soldiers’ units.

The statement added: “In the unpublished confessions, Private Myo Win Tun describes his involvement in killing Rohingya women, men, and children, and he admits to rape in Taung Bazar village and surrounding villages in Buthidaung Township in September 2017.”

“Zaw Naing Tun confesses to his involvement in killings, burying bodies in mass graves, and other crimes against Rohingya in five villages in Maungdaw Township during the Myanmar Army’s 2017 ‘clearance operations,'” said the statement.

The soldiers also provided the names and ranks of 19 direct perpetrators from the Myanmar Army, including themselves, as well as six senior commanders — a lieutenant colonel, a colonel and three captains — who they claim ordered or contributed to atrocities against Rohingya.

In mid-August, the two men appeared on the Bangladesh-Myanmar border, requesting protection from Bangladesh authorities, it said, adding that “as a state party to the Rome Statute, Dhaka notified the ICC of the presence of the two former soldiers.”

Referring to one of the confessions, the statement added that the army destroyed Rohingya villages in the vicinity of Taung Bazar in Buthidaung Township in September 2017.

“He also admits to rape, his involvement in the killings of 30 men, women, and children in Taung Bazar, and the additional killings of 60 to 70 civilians in ‘village after village’ in the vicinity of Taung Bazar,

“He and his battalion ‘wiped out’ 20 Rohingya villages in Maungdaw Township in September 2017 and that he participated in the killing of an estimated 80 civilians, ‘including children, adults, women, and even elderly people’ through coordinated massacres.”

Based on these confessions alone, both soldiers may be directly responsible for killing up to 180 Rohingya civilians, the statement said.

Fortify Rights’ head Smith said the confessions, which he said were reliable, “undermines everything Myanmar is arguing” at the International Court of Justice (ICJ) in a case filed in 2019 by Gambia on behalf of the Organization of Islamic Cooperation (OIC).

However, he noted that the prosecutor’s office was “refusing to comment on an ongoing investigation, and a spokesperson from the court publicly denied the men are held in ‘custody.'”

“I believe the court spokesperson is relying on a technical definition of ‘custody,’ which is fair, but the reality is that two perpetrators of Rohingya massacres are in The Hague, effectively in court custody,” Smith said.

Expressing hope that the confessions would speed up the trial of all those involved in the massacre of Rohingya he added: “They [two soldiers] should be prosecuted and the prosecutor should work with them to hold others accountable.”

Also speaking to Anadolu Agency, John Quinley, a senior human rights specialist at Fortify Rights, said: “This is a major step for justice and accountability for Rohingya.”

“These two men confessing to crimes matches our ongoing documentation of genocide in Myanmar.”