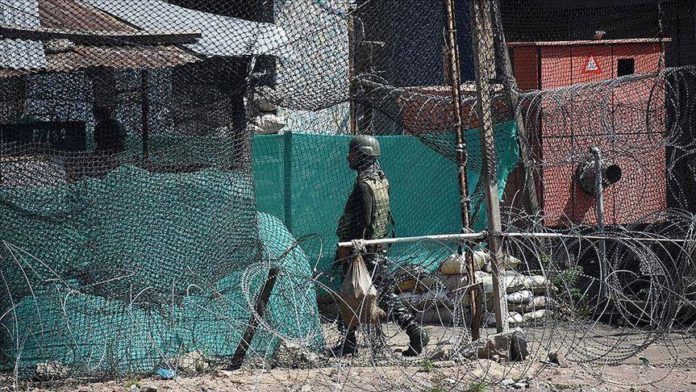 On Nov. 26, Muhammad Saleem, 27, a school teacher was checking examination papers of his students when he heard gunfire. It had been years since the last firing incident had occurred in Aban Shah, a semi-urban locality in the outskirts of Srinagar – the capital of Indian administered Kashmir.

An hour later, people, who started coming out of their homes learned that two Indian soldiers were shot dead by militants, who later released a video claiming the attack.

A day later around midnight, 35 masked soldiers form a nearby security camp detained 35 men, including Saleem

About midnight the next day, a large group of masked soldiers from a nearby camp arrested 35 men, including Saleem from their homes. They were ordered to the camp and beaten ruthlessly with polycarbonate sticks. The soldiers were repeatedly asking them to reveal the identity of militants.

A local hospital confirmed the physical assault on Salim, who has been prescribed complete bed rest. Fearing another bout of beating by soldiers, he had shifted to a relative’s home.

Sitting beside him was his 20-year-old brother, Adil, who has his right wrist plastered. A student of agriculture sciences, Adil is worried whether he can sit in his second-semester examination beginning Dec. 15. Doctors have recommended plaster for two weeks ending this Sunday.

Speaking to Anadolu Agency, a shopkeeper, Altaf Ahmad, said he was trying to save his seven-year-old nephew when he heard fire shots. Showing baton marks on his body, he asked when one is battling for his own life, how can you know who is fining the shots?

A 19-year-old boy who works at a bakery is still nursing injuries at home. His impoverished father, Abdul Samad, is ruing not only as the job day was lost, but also expenses he had to incur on the treatment. On the request of victims, their names have been changed in the report.

The army in a statement described allegations of beating as “fabricated”. Despite contacting Col. Rajesh Kalia, spokesman of the Indian army in Srinagar did not respond to Anadolu Agency’s queries.

“You think out of blue my brother grew a plaster and I decided to wear a black belt? I haven’t even checked those,” he said, pointing to a stack of notebooks and answer sheets, which he was checking when the incident of firing took place.

The residents of Aban Shah have resigned to their fate. None has filed any complaint with the police, as they believe none would be punished.

“Don’t we know what happened to the thousands of inquiries the government ordered into countless incidents of human rights violations for the past three decades,” said Samad.

But Muhammad Yusuf, a sheep farmer, is determined not to give up what he calls the “fight for justice”. A resident of Rajouri, a district in Jammu province, Yusuf said that he has filed a petition in the High Court against the soldiers responsible for the killing of his son Abrar Ahmad, 25, and his two cousins, Abrar Khatana, 18, and Imtiyaz Ahmad, 21.

On July 18, the Indian army claimed to have killed three “unidentified terrorists” in Shopian district of Kashmir valley, where they had come for work a few days earlier. The families identified them from the photos shared widely on social media.

The three cousins were buried in a remote graveyard. Indian army does not hand over bodies of militants to their kin for burial for fear of eruption of anti-India protests on such occasions.

DNA tests established the real identity of the cousins in September. On Oct. 3, their bodies were exhumed and handed over to their families for burial in their hometown, which is about 300 kilometers (186 miles) from where they were interred earlier.

“The only wrong they have corrected so far is that they returned the body of my son and his cousins. Justice is yet to be done. I will fight for justice in the Supreme Court. What crime did my son commit?” Yusuf asked.

A Court of Inquiry ordered by the Indian army later said the soldiers involved in killing had breached powers provided to them under the Armed Forces Special Powers Act. International rights bodies have criticized the law for giving sweeping powers to soldiers in Kashmir. An army spokesman had said a “competent disciplinary authority has directed to initiate disciplinary proceedings under the Army Act against those found prima-facie answerable”.

But Ahsan Untoo, a human rights defender and chairman of the International Forum for Justice and Human Rights believes that Yusuf’s quest for justice might end up as “one more fruitless struggle tens of thousands of Kashmiris have grown tired of fighting all these years”.

He said that, the State Human Rights Commission, a statutory rights body that heard cases of rights violations and recommended actions was rendered ineffective when India revoked the autonomy of Jammu and Kashmir on Aug. 5 last year. A new body is yet to replace the commission.

The mass beating in Aban Shah and the murder of three cousins by the army could have been heard by the Commission.

Since its inception in 1997, the commission had taken up 8,529 cases related to human rights violations and disposed of 7,725 cases until March 2019, according to its records. It had made recommendations, like asking the government to pay compensation to victims, in 1,862 cases during this period.

“Even this small number entertained by the commission shows the scale of rights violations. About 500 petitions I had filed on behalf of victims were under process when it ceased to exist. Justice has been locked,” said Untoo.

According to Sheikh Showkat Hussain, a former professor of law and noted political commentator, there is a “three-pronged attack on human rights in Kashmir”.

“While the rights violations have not stopped, the government scrapped a diploma course in human rights at Kashmir University. Its own State Human Rights Commission has ceased to function. And now, human rights organizations and activists have been targeted,” he said.

Untoo spent a year in Srinagar Central Jail, after his arrest in August 2019, under a preventive detention law. He was again arrested on Oct. 2 and then released on Nov. 23.

On Oct. 29, India’s National Investigation Agency raided the office of Jammu and Kashmir Coalition for Civil Society (JKCCS) and the home of its coordinator, Khurram Parvez, an award-winning human rights defender. The NIA said the raids were conducted in connection with an investigation into inputs that some trusts were “collecting funds domestically and abroad and then using them to fund secessionist and terrorist activities in Jammu and Kashmir”.

Several computers of the JKCCS were seized. Credited with bringing out elaborate reports on rights violations by Indian forces, the JKCCS has stopped functioning since the raids.

US defense head says he wasn't briefed on Russia bounty