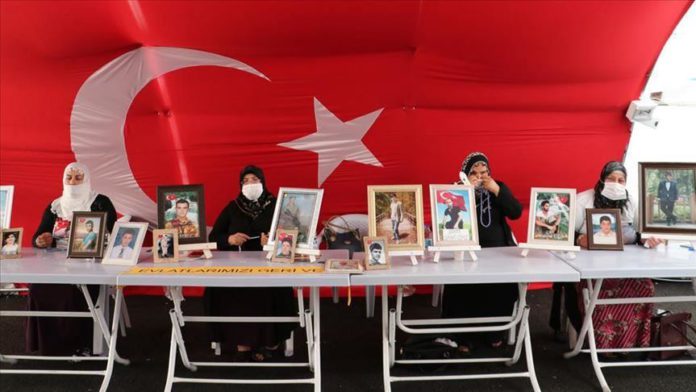 Hopes of families have flourished for the return of their children abducted by the YPG/PKK terror group after one more protesting family reunited with their child in southeastern Turkey.

The grieved families continued their sit-in on the 312th day on Friday in the Diyarbakir province outside the office of Peoples’ Democratic Party (HDP), which the government accuses of having links to YPG/PKK.

The protest started on Sept. 3, in the city when Fevziye Cetinkaya, Remziye Akkoyun and Aysegul Bicer said their children had been forcibly recruited by PKK terrorists. The sit-in of families has been growing day by day with the participation of many others since then.

Protesters have vowed to stay there until every family reunites with their child.

On Thursday, Ramazan, son of Cemal Ertas who is physically disabled, surrendered to security forces escaping the terror group and has become a ray of hope other families.

Aynur Panay, one of the protesting mothers, said that she joined the protest for her son Emrah, and urged the HDP to send him back.

“It is no one other than the HDP that took away my son,” she said.

Referring to Thursday’s reunion, Panay expressed happiness for the family and said she also wants to take her son back.

“You do not belong there,” she called out to her son, urging him to surrender to security forces.

Sevket Bingol, who joined the demonstration for his son Tuncay, asked for support from all the families suffering from the same woe.

“We got so happy, our hope has boomed,” Bingol said, referring to Ramazan’s return.

“We will continue to wait with more happiness from now on. Because our children will turn back,” he said.

July 18, 2020
We use cookies to ensure that we give you the best experience on our website. If you continue to use this site we will assume that you are happy with it.Ok