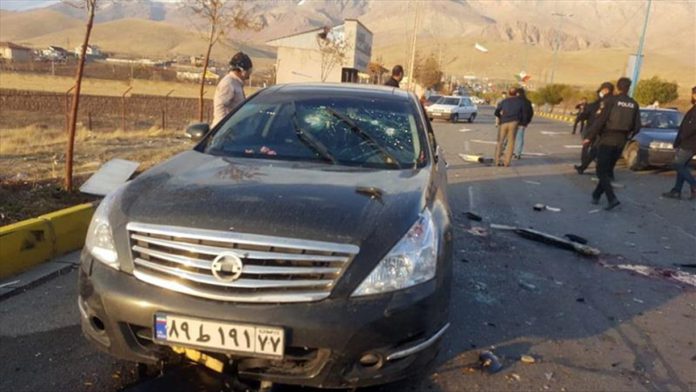 The killing of Iran’s top nuclear scientist dominated the front pages of all prominent Iranian newspapers on Saturday.

The headlines reflected the popular mood in the country in the wake of Mohsen Fakhrizadeh’s assassination on the outskirts of capital Tehran on Friday.

Many top political and military officials have directly blamed Iran’s longtime rival Israel and vowed “strong retaliation” – a stance also taken by most dailies aligned with the conservative faction.

Watan Imroz, a prominent conservative newspaper, warned that Iran’s enemies will continue such attacks if Tehran does not strike back.

Its headline – “If we don’t strike, they will strike” – has turned into a popular hashtag on social media and was also used by protestors who gathered outside President Hassan Rouhani’s office on Friday evening.

Jam-e-Jam, another conservative daily, termed the incident a “return to November 2010.”

The headline referred to the killing of prominent Iranian nuclear scientist Majid Shahriari on Nov. 29, 2010.

Farhikhtegan, a conservative newspaper believed to be affiliated with one of the top private universities, ran a front-page headline with a symbolic red background.

It termed the top scientist’s killing an “assassination of the fountainhead,” an apparent reference to the slain scientist’s stature in Iran’s defense industry.

The newspaper said “Westerners” have persistently targeted “symbols of Iran’s national power” due to the “government’s weak policies.”

“Eye for an eye: Zionists should wait,” warned Keyhan, an old newspaper affiliated with a hardline organization, pointing directly at Israel and calling for “hard revenge” for the scientist’s killing.
In a relatively milder headline, Risalat, another conservative daily, said the “pride of Iran’s nuclear industry” had been killed.

Tehran Times, an English-language daily close to Iran’s conservatives, said the “footprints of Israel with the backing of the incoming US government” were evident in Fakhrizadeh’s assassination.

Iran, the state-owned Farsi-language daily, slammed the scientist’s “assassination” and stuck to Foreign Minister Javad Zarif and the Defense Ministry’s statements on the incident.

Hamshahri, a popular daily linked with Tehran’s municipality, called it the “assassination of a defense scientist” and referred to Zarif and army chief Gen. Mohammad Baqeri’s remarks that Fakhrizadeh’s “legacy will be carried forward.”

Risalat, another reformist newspaper, in termed it a “cowardly assassination.”

Arman Milli, a popular reformist newspaper, alluded to imminent “tensions” in the wake of the killing.

Etemaad, a fiercely pro-government daily, ran a report on the assassination with preliminary details about the incident.

Etalaat, the oldest Iranian newspaper, said it was “the martyrdom of a defense industry scientist in a terror attack.”

The varying views in Iran’s media are a reflection of the disagreement between conservatives and the reformist government over how to respond to Fakhrizadeh’s killing.

While popular opinion in the country seems to be overwhelmingly in favor of “revenge,” the official stance appears to be different.

Ali Rabie, a government spokesperson, said on Saturday that the “aggressor will definitely be punished, but not in the field he defines,” a hint that Tehran may not see military retaliation as a viable option.

Importantly, Iran’s supreme leader has called for action against the perpetrators.

In a statement on Saturday, Ali Khamenei said all authorities in Iran must “place two crucial matters on their agendas” in the wake of Fakhrizadeh’s killing.

“First, investigating this crime and firmly prosecuting its perpetrators and its commanders,” he said. “Second, continuing the martyr’s scientific and technological efforts in all the sectors where he was active.”