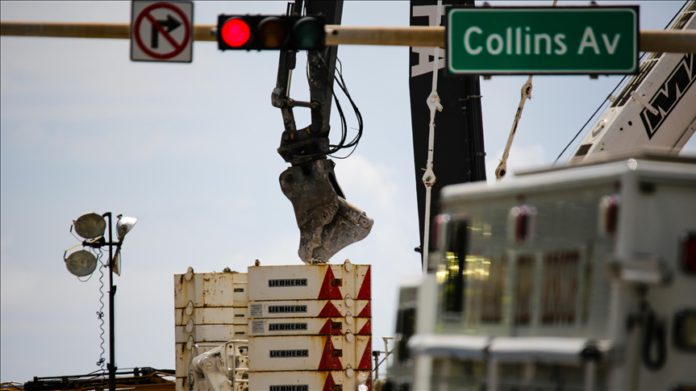 The mayor of Miami, Florida said Friday that she signed an emergency order to demolish the remaining portion of a condominium building that partially collapsed last week.

Daniella Levine Cara said her top priority is still the search and rescue for victims and that she did not want to take any action to jeopardize that operation.

But she said the rest of the building has to come down as soon as possible.

“I know how difficult this is for the families who escaped the building and who have lost their homes and their belongings,” she said, as she emphasized the building poses a threat to public health and safety.

Levine Cara said that with two more bodies recovered Friday, the death toll rose to 22. The number of unaccounted people stands at 126.

About half of the 12-story building collapsed last week, and the frantic search for survivors has only yielded one — a boy rescued in the early hours after the disaster.

Looming over search efforts is approaching Hurricane Elsa, which, at the moment, is on track to reach South Florida on Tuesday.

The current track of the storm has the eye hitting the western portion of the Florida peninsula, avoiding a direct hit on Miami.

But Levine Cara called it “an unprecedented disaster” and vowed search and rescue efforts would continue “no matter what is thrown our way.”

As for the demolition of the remaining portion of the building, she did not say when or how that will happen, or whether it would happen before the storm arrives.

The portion of the building that fell on the Atlantic Ocean beach side of the property is where search and rescue efforts continue.

The demolishing of the remaining half might happen to the opposite, or street side, of the property.

Rick Slider, president of the Slider Engineering Group, told CNN that it is unlikely residents who managed to dash out of the portion of the building that is still standing, in the middle of the night, will be able to retrieve their belongings.

“The odds of them being able to salvage much,” Slider said, “is not going to happen.”