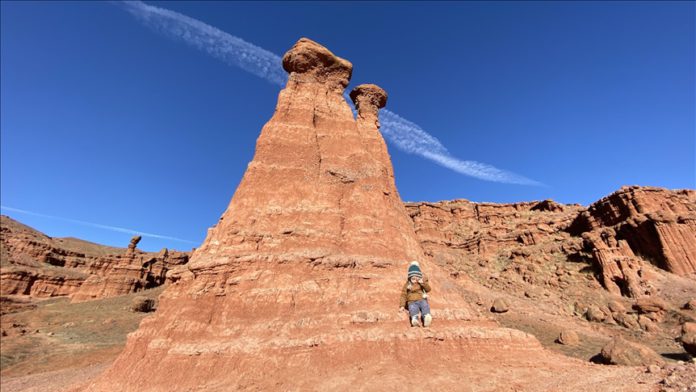 The red fairy chimneys with impressive structures in eastern Turkey are set to host tourists with new projects and facilities in the area.

The impressive cluster of tall, cone-shaped rock formations called Narman Fairy Chimneys, also known as the “Land of the Red Fairies,” is expected to attract visitors with new projects in line with its geological features and appearance. The projects were undertaken jointly by the provincial governorship and metropolitan municipality.

The site with 12 different canyons located in the Narman district of the eastern Erzurum province, is also notable for its resemblance to the Cappadocia region, a semi-arid region in central Turkey.

The process of formation of red fairy chimneys took millions of years, while in terms of structure and color they draw parallels with the Grand Canyon of the Colorado valley in the US.

In the 62-kilometer (38.5-mile) valley, encompassing these chimneys, there are bicycle, horse, quad bike safari and trekking trails available for adventure seekers.

Added to the UNESCO World Temporary Heritage list in 2012, the fairy chimneys were opened for tourists in 2010.

Speaking to Anadolu Agency, Governor Okay Memis urged tourists to come and see the beauty of the Narman Fairy Chimneys, which are easy to access and provide a unique view of natural wonders.

Memis said an observation terrace is also planned to be built as part of the new projects.