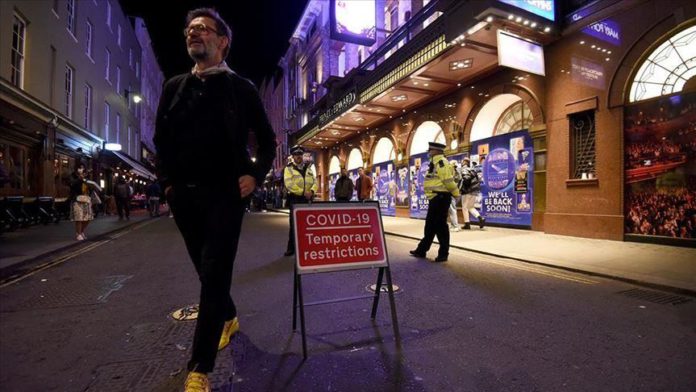 British authorities announced on Friday that 6,874 people across the UK over the past 24 hours tested positive for coronavirus.

The new tally broke the record for the number of daily cases that was set only yesterday, when the figure was 6,634. The total number of positive test results now stands at 423,236.

Excluding Scotland due to a power outage at the National Records of Scotland, a further 34 people died, bringing the total to 41,936.

London will be added to the national coronavirus watchlist.

London Councils, which represents the capital’s 32 boroughs and the City of London, said in a statement: “It is a stark reminder that now is time for all Londoners to pull together and take action to keep themselves, their families and their communities safe, and to ensure that London’s economy is protected.”

“The near collapse of test and trace and the resurgence of the virus means new measures to slow its spread were absolutely necessary,” he added.

Khan blasted the government’s failure on testing for the cause behind London’s addition to the coronavirus watchlist, saying: “Testing capacity was diverted away from London in the last two weeks to other national hot spots and weekly testing numbers are now down 43 per cent in the capital since mid-August.

“The lack of testing capacity is totally unacceptable and it is why London has been added to the Government’s coronavirus watchlist as an area of concern. Ministers simply have to get a grip.

“It’s vital that testing capacity is increased immediately in London and focused in the areas it is needed most. Any delay will mean letting the city down and will cost lives.”

Khan told the Guardian: “One of the things that I said to the prime minister is: I think we should be following what’s happening around the country and stopping social mixing of households, and I say that with a heavy heart.”

Blackpool, Leeds, Stockport, and Wigan in the north of England will all face tighter coronavirus restrictions.

In Wales, both the capital Cardiff and the second city Swansea will enter local lockdowns on Sunday, with the town of Llanelli doing the same on Saturday.

The R number represents how many people an infected person goes on to infect. A value between 1.2 and 1.5 means every 10 people will go onto infect 12 and 15 others.

Sage said there was now a “widespread growth of the epidemic across the country.” New infections were increasing by between 4% and 8% per day, they said.

Amid tightening restrictions nationwide and all coronavirus indicators trending in a worrying direction, there have been signs of a return to the panic buying seen last March when the first national lockdown was announced.

Major supermarkets have begun rationing of key items early, in order to prevent scenes of empty shelves that occurred earlier in the year.

Morrisons, one of its rivals, introduced similar measures yesterday.

A spokeswoman for Tesco said: “We have good availability, with plenty of stock to go round, and we would encourage our customers to shop as normal.”

“To ensure that everyone can keep buying what they need, we have introduced bulk-buy limits on a small number of products.”