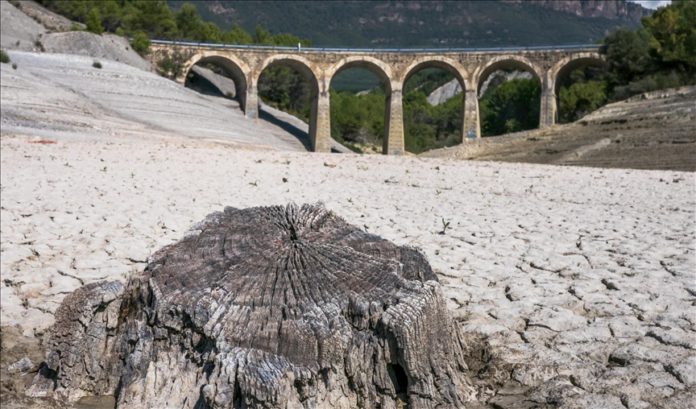 Spain’s state meteorological agency reported Monday that January had the highest maximum temperatures on record and was also one of the driest.

The average daily high across the country was 2.1 degrees Celsius (3.78 degrees Fahrenheit) hotter than usual, although lower lows than normal helped balance the overall averages.

Likewise, last month was the fifth driest January in Spain since record-keeping began in 1961.

These data acknowledges what is already being observed in anomalously shallow freshwater reservoirs in much of the country.

Overall, the basins are nearly 45% full. That is almost 15 percentage points less than the average for this time of year, measured over the past decade.

Since Spain’s rainy season began in October, it has rained 36% less than average, according to the meteorological agency AEMET.

Around 75% of the country’s rain falls between October and April, with summers being characteristically dry and hot.

The rain in Spain has also been more abundant than usual in the north and center of the country, where historic showers caused rivers to burst and severe flooding in December.

Meanwhile, other parts of the country, particularly the south and much of the Mediterranean coast, are being sucked dry.

Andalucia has been hardest hit. An official “drought declaration” was issued for the Guadalquivir reservoir in November, which currently sits at just 29% capacity.

Authorities in the region have already added restrictions to water use for certain sectors and are pleading with average consumers to avoid wasting water.

In Catalonia, where 2021 was the driest year on record, authorities are on the verge of issuing a “pre-alert” for drought, local daily La Vanguardia reported.

According to the UN, the Mediterranean region is warming 20% faster than the global average and droughts could become an increasing reality.

Much of southern Spain could even be turned into a desert by the end of the century if temperatures and greenhouse gases continue to rise unchecked, according to a 2016 paper published in Science.