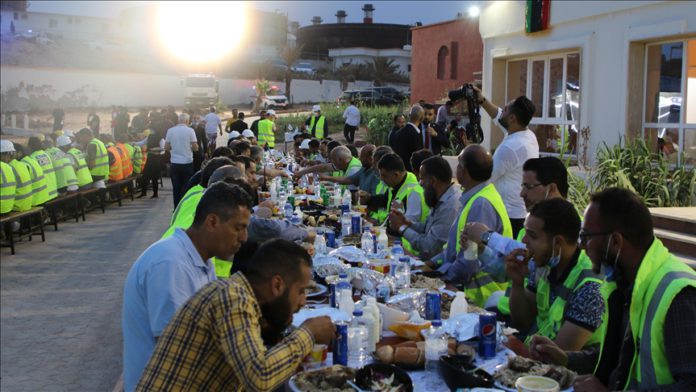 A decade of civil war in Libya has left behind a massive trail of destruction and thousands of unemployed Libyans.

The Libyan government hopes that commencing on a $200-billion infrastructure reconstruction project extending over ten years will create jobs that will curb high unemployment rates and open the country to investments in all sectors.

The “reconstruction process will incorporate both Libyan and non-Libyan workers, create direct and indirect jobs, and energize the service sector,” Libyan Minister of Labor, Ali Al-Abed, told Anadolu Agency in an exclusive interview.

Al-Abed also expressed optimism that the reconstruction program will open the door for investment in the country.

“The Libyan market is promising, and with the stability of the security and economic situation, investments will return strongly,” he said.

Libya recorded its worst economic performance in 2020 due to a reduction in crude oil production from 1.3 million barrels to less than 90,000 barrels per day due to rising debts.

The oil-rich country has remained beset by turmoil since 2011 when longtime ruler Muammar Gaddafi was ousted and killed in a NATO-backed uprising after four decades in power and has not witnessed tangible reconstruction projects ever since.

The reconstruction projects have created a demand for skilled foreign workers and Egyptian workers are considered among top candidates for the task.

“We signed a memorandum of understanding with Egypt in this regard, especially since Egyptian workers have a history in the Libyan market and experience in reconstruction,” Al-Abed said.

Libya needs more than two million Egyptian workers to rebuild the destroyed Libyan cities, according to estimates by the Libyan Chamber of Industry.

However, Al-Abed said that the Egyptian government is yet to allow its workers to return to Libya.

“We are waiting for the Libyan-Egyptian joint committee to convene, and after the committee’s meeting, the memoranda of understanding will be upgraded to agreements,” Al-Abed said.

During his visit to Tripoli in April, Egyptian Prime Minister, Mostafa Madbouly, agreed with his Libyan counterpart, Abdul Hamid Dbeibeh, to initiate the joint higher committee meetings between the two countries as soon as possible.

“Turkey is a friendly and brotherly country, and we have a long history of joint investment, especially in the field of reconstruction and construction,” Al-Abed said.

Turkish companies “have experience in reconstruction, and the Libyan market needs Turkish companies,” Al-Abed said, adding that previously concluded agreements will be “activated to return the Turkish workforce to Libya.”

During a meeting with President Recep Tayyip Erdogan in Ankara in April, Dbeibeh said his country welcomes Turkish companies to take part in his country’s reconstruction.

“Libya awaits great work in reconstruction and development, and it welcomes all Turkish companies and firms from friendly and brotherly countries to contribute to this matter,” he said.

“Certainly, Turkish companies will be the most important of these companies for their long experience working in Libya, and we will work to address any obstacles in this regard.”

While the unemployment rate is very high in Libya, Al-Abed said the figures are not accurate.

“The unemployment figures in Libya are not accurate. They are conflicting as a result of previous division in the government due to the presence of a parallel ministry in the east.”

Now that the ministry is unified, Al-Abed stated that work is ongoing to “follow up on the available data and linking all the civil agencies to determine the exact rate of unemployment.”

“We now have more than 300,000 job seekers and more than 2,400,000 employees in the country,” Al-Abed said, stressing that “the administrative apparatus of the state does not need all this number of employees.”

According to Al-Abed, the number of employees in Libya did not exceed one million before Gaddafi’s ouster.

Libya has been torn by civil war since Gaddafi’s ouster in 2011. The war was exacerbated when warlord Khalifa Haftar, supported by several countries, carried out a military onslaught to topple the Tripoli-based internationally recognized government for control of the North African country.