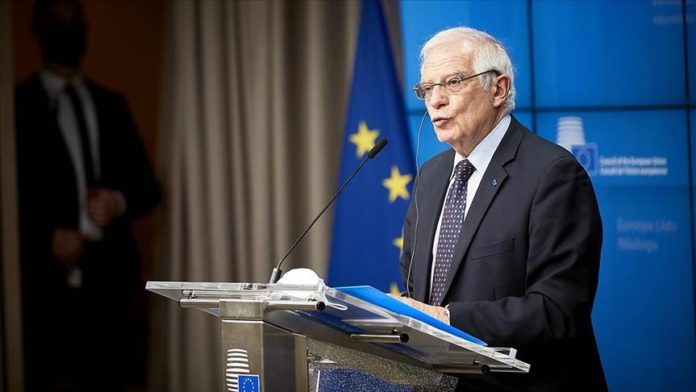 The EU foreign policy chief has said that there is a “real opportunity” to seize a settlement on the Cyprus issue.

“The UN work on the ground is essential for confidence building. Upcoming UN informal 5+1 talks provide an opportunity towards an urgently needed resumption of talks. The EU is strongly committed to support these efforts,” Josep Borrell tweeted on Friday after visiting the Greek Cypriot Administration.

The UN invited Turkish and Greek Cypriot leaders, as well as guarantor states Turkey, Greece, and the UK for informal talks in Geneva on April 27-29. The EU is also expected to attend as an observer.

Engaging talks will be beneficial for both parties, the region, and the EU, he said.

During his visit to Cyprus, Borrell met Ersin Tatar, the president of the Turkish Republic of Northern Cyprus (TRNC).

Following talks with Tatar, Borrell said on social media that he underlined the “importance of reaching agreement on settlement negotiations & of relaunch of UN process” under the established parameters.

“EU is ready to provide full support to the benefit of all Cypriots,” he said.

“We had a constructive and productive meeting with Mr. Borrell. I want to express my contentment at receiving Mr. Borrell and his delegation at the Presidency, at my working office,” Tatar said in a statement.

They evaluated bilateral relations with the EU, the Cyprus issue, and the Eastern Mediterranean as well as many other issues, he said.

Tatar emphasized the need to create an environment of stability and cooperation on the island of Cyprus as well as the eastern Mediterranean region.

“I explained that the most important factor of achieving this is for the EU to approach the sides in light of the prevailing realities. The Greek Cypriot leadership has no authority or power over the TRNC whatsoever, which they clearly know,” he noted.

He underlined that the sovereign equality and equal international status of the Turkish Cypriot people must be respected.

On the 5+1 talks, he said the Turkish Cypriot side is preparing for the meeting in a “determined and constructive manner.”

“We will convey our vision in an elaborative manner for a settlement that is based on the sovereign equality of two states which enjoy equal international status in order to reach a just, realistic and sustainable settlement,” he added.

Highlighting the importance of cooperative relations of the two states, he said that “this important element and the acceptance of the current realities … can make Cyprus an island of prosperity and a center of attraction, rather than being enunciated as an island of tension and problems.”

“This will also help positively change what is described by all sides in relation to the Cyprus issue as the unsustainable status-quo, and significantly contribute to the security, stability, prosperity and future of the two Peoples, the island of Cyprus and our region,” he said.

The Cyprus issue remains unresolved despite a series of efforts in the past two decades, including a failed 2017 UN initiative with the participation of the guarantor countries.

The Greek Cypriot south entered the EU in 2004, the same year that Greek Cypriots thwarted a UN bid — the Annan Plan — to end the decades-long dispute in a referendum.

Multiple displacements add to the pain of Yemen civilians