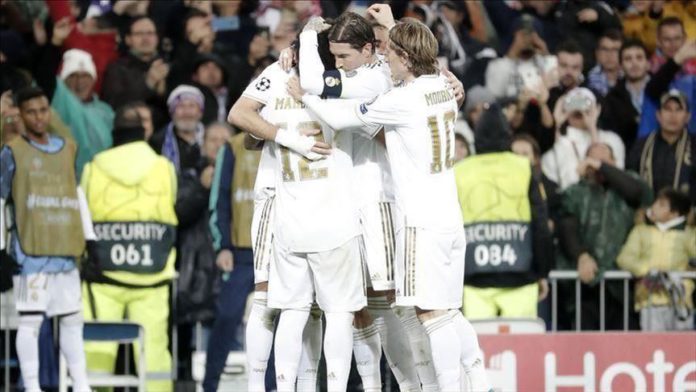 Real Madrid toppled Eibar 3-1 in the Spanish league on Sunday to pursue leaders Barcelona in the standings.

This season of the top-tier La Liga saw a relentless race between the giants as Barcelona were ahead with 61 points and their bitter rivals, second-placed Real Madrid, increased their points to 59 over the home win against Eibar.

Sevilla came third as they earned 50 points in 28 matches.

Real Madrid finished the job in the first half, scoring all three goals to clinch the victory.

German midfielder Toni Kroos scored the opener in the fourth minute to give Real Madrid a 1-0 lead against Eibar.

Kroos had the ball in the penalty box to missile it into the top corner.

Belgian star Eden Hazard beat offside on a counter attack to create a chance as he was one on one with Eibar goalkeeper.

Hazard assisted to Ramos as the Spanish captain, who was unmarked in the penalty box, scored an open goal.

In the 37th minute of the match, Real Madrid’s Brazilian left back Marcelo made the score 3-0 for his team, firing a low shot towards the left corner of the Eibar goal.

Pedro Bigas netted the ball into the Real Madrid net in the 60th minute, a consolation goal for Eibar. The ball in motion was deflected by Bigas to deceive Real Madrid goalkeeper Thibaut Courtois.

“There’s no better way to come back than with a win,” Ramos said in a post-match interview.

One of the team’s sensational signings, Bale has been playing for Real Madrid since 2013.

La Liga is being held behind closed doors over the novel coronavirus pandemic.