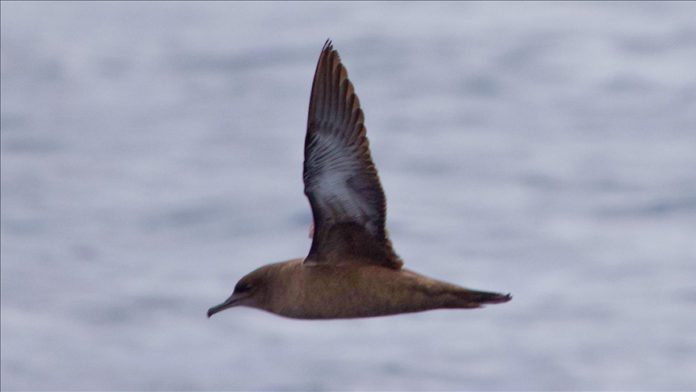 The endangered sooty shearwater bird, which lives in the oceans, was spotted in Hatay, Turkiye’s southern province.

The bird, also known as Ardenna grisea, was spotted by birdwatchers Emin Yogurtcuoglu, Murat Bozdogan, and Ahu Ilbeyi off the coast of Samandag near Mileyha Wetland, a migratory bird sanctuary.

Sooty shearwaters get the name “sooty” owing to their dark plumage. The long-distance migrant birds mainly breed on small islands in the South Pacific and South Atlantic Oceans.

Yogurtcuoglu told Anadolu Agency that a total of 387 of Turkiye’s 494 listed birds are spotted in Hatay.

Noting that the province is a frequent destination for birds migrating from Anatolia and Europe, the birdwatcher said: “Therefore, every wetland and every natural habitat here is of extra importance.”

He said Hatay is a place where birds migrate every season, bringing with them a diverse range of bird species.

He also underlined that the sooty shearwater is an ocean bird that was sighted for the first time in the country.

“This ocean bird rarely enters the Mediterranean in small numbers. Frankly, we have been looking for this bird in Hatay or the southern coast of Turkiye for years,” he added.

Noting that many birdwatchers thought the sooty shearwater would come out, but they could not see it, he said: “We thought that in very strong storms, it could be dragged from the inland sea to the shore.”

Yogurtcuoglu and his friends were unsuccessful in their attempts to venture out into the field on stormy days and scan the open sea with their telescopes.

“We wanted to make a difference, and we went to a little bit open (sea) in a small boat. It was the first bird that came to us. It was a very exciting moment,” he said.

He also noted that only six more species left for Turkiye to reach the 500 mark, and said that it will be “a very good number for the country.”