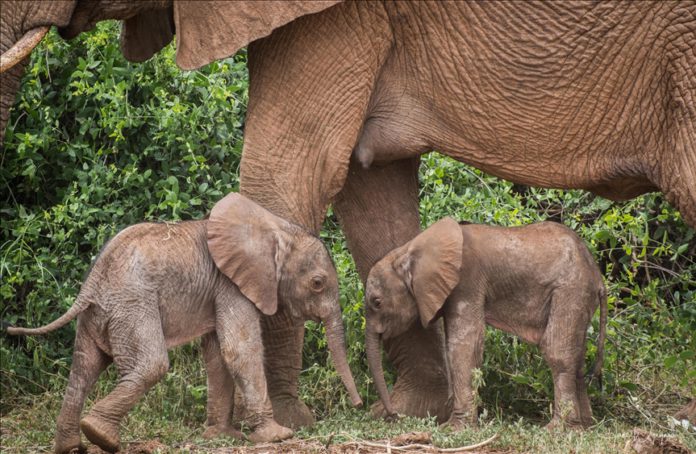 Rare elephant twins have been born to the Winds II elephant family in the Samburu National Reserve in Kenya.

The twins are their mother’s second born. The mother, Bora, has an older calf that was born in 2017 and was seen near Bora and the twins.

Iain Douglas Hamilton from the Save the Elephants conservation NGO, who documented the births, told Anadolu Agency that in the elephant world, twin births are very rare, representing about 1% of all births.

Hamilton said most twin elephant births that occur around the world happen in the wild and are never seen by humans but this time the births have been seen and recorded.

“It is rarely reported. In all the previous cases where an elephant has given birth to twins in Kenya, one of the babies died because it is a big stress on a female. This is because she has to produce enough milk and when elephants give birth they are quite thin,” said Hamilton.

“The good thing is that these babies, who were born on Monday and already there has been some rain and there is a lot of green which means that the mother will be able to feed well and produce milk, so we are cautiously optimistic that the birthed babies will survive,” he added.

The birth of twins has been recorded just once in Kenya in 2006 but both calves died shortly after birth in the Shaba National Reserve.

Researchers say that the next few days will be touch and go for the twins and fingers remain crossed for their survival.

The African elephant has the largest gestation period of any living mammal — approximately 22 months — and gives birth roughly every four years.​​​​​​​